Manufacturing resumed its expansion in March, with durable goods orders rising 0.8% from February, according to the Commerce Department. Orders grew for the fifth time in six months following a 1.7% setback in February. Gains were led by a 5% rise in automotive orders and a 2.6% gain for computers and electronics. Aircraft orders declined. Excluding volatile transportation equipment, orders were up 1.1%. Since March 2021, all orders rose 12.6%, including 10.3% without transportation. Core capital goods orders, a proxy for business investment, rose 1% from February and were up 10.4% from March 2021.

An imbalance between weak supply and strong demand continued to drive the year-to-year increase in residential prices in February, according to the S&P CoreLogic Case-Shiller home price index. The national index rose by 19.8%, behind only August and July last year as the highest in 35 years of data. All 20 cities in the composite index increased year-to-year gains from January. An analyst from S&P said he expects rising mortgage rates eventually to slow home price increases, which have been far outpacing overall inflation. 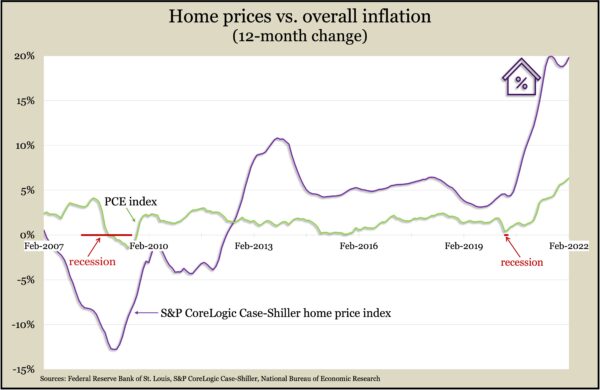 The Commerce Department said the annual rate of new home sales declined 8.6% in March, the third dip in a row, falling to the slowest pace since November. As a result, the supply of houses for sale rose to the highest level since October. Cost of ownership continued to rise. The median sales price rose 21% from March 2021 to $436,700. New houses of $500,000 and higher accounted for 38% of all sales, vs. 22% the year before.

The Conference Board said its consumer confidence index declined slightly in April with relatively high opinions on current conditions suggesting continued economic growth. The business research group said gas prices and the war in Ukraine did not appear to dampen expectations, which rose slightly but remained relatively low. Fears of inflation receded from a record high in March, and more consumers reported plans to buy big-ticket items like cars and appliances.

The National Association of Realtors said its index of pending home sales fell 1.2% in March, the fifth decline in a row. The trade group’s index was down 8.2% from the year before, the 10th consecutive year-to-year decline. An economist for the association said higher mortgage rates were narrowing the pool of home buyers. He forecast a 9% drop in houses sold this year and projected annual price increases to decelerate to 8%.

The U.S. economy sank at an annual pace of 1.4% in the first quarter, though on a full-year basis, inflation-adjusted gross domestic product was up 3.6%, according to the Bureau of Economic Analysis. Real GDP was 2.8% above its pre-COVID peak at the end of 2019. Global supply issues slowed economic pace with declines in inventories and a record trade deficit. Consumer spending, which drives about two-thirds of economic activity, advanced at a 2.7% annual pace, led by spending on services. Year-to-year, adjusted for inflation, consumer spending rose 4.7%, down from 6.9% in the fourth quarter. The Federal Reserve Board’s preferred measure of inflation rose 6.3% from the first quarter of 2021, more than triple the Fed’s target pace. 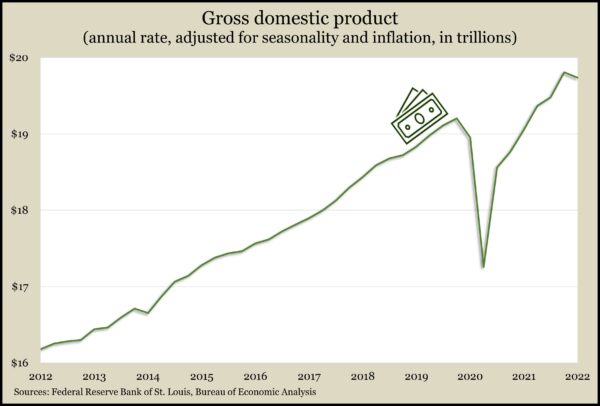 The four-week moving average for initial unemployment claims rose for the third week in a row after reaching an all-time low. New claims were 51% lower than the 55-year average, according to Labor Department data. In the latest week, 1.5 million Americans claimed jobless benefits, down 6.3% from the week before and down from 16.5 million the year before.

The Bureau of Economic Analysis said consumer spending rose 1.1% in March, exceeding a 0.5% gain in personal income. Much of the spending increase went to services, including travel, restaurants and hotels. The personal consumption expenditures index, which the Fed follows for inflation, rose 6.6% from March 2021, the highest in 40 years. However, the core rate, which excludes volatile food and energy prices, declined to a 5.2% rate from 5.3% the month before. Month to month, the core rate steadied at 0.3%, unchanged from February and down from 0.5% in the three previous months.

Often a pre-cursor to spending, consumer sentiment, rose slightly in April but still was  near the lowest level in the last decade. The longstanding survey from the University of Michigan showed outlooks improving slightly for the broad economy and personal finances because of an anticipated dip in gas prices. An economist with the survey noted the precariousness of consumer confidence amid high inflation, the war in Ukraine, rising interest rates and partisan gridlock.