Amid inflated prices and historically low inventory, U.S. housing starts and building permits remained elevated in March. Seasonally adjusted annual rates slowed from February for single-family permits and starts, just as mortgage rates rose. Still, the overall pace stayed near 2006 highs. The level of housing under any stage of construction was close to the record set in 1973. Single-family houses under construction reached their highest level in more than 15 years. 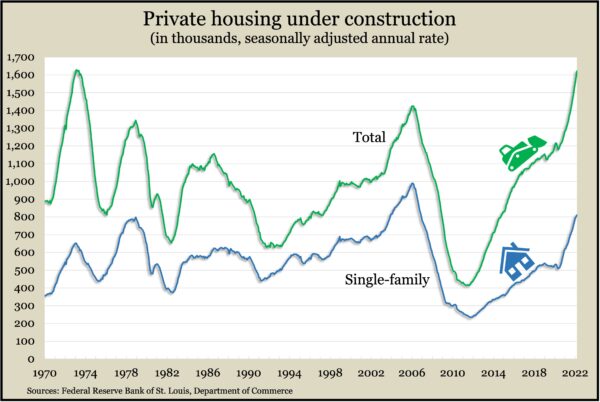 At the same time the construction industry is building housing supply, the demand has begun to sink. The National Association of Realtors reported the second month in a row of declining existing home sales in March and forecast the number of transactions would recede by 10% in 2022. The trade group blamed rising mortgage rates and inflation concerns for weakening demand. And while inventory rose 12% from February, it remained historically tight, continuing to push year-to-year prices higher for the 121st month in a row. The median sales price rose 15% from March 2021 to a record $375,300.

The four-week moving average for initial unemployment claims rose for the second week in a row after hitting an all-time low. The average reached 177,250, which was 52% below the 55-year average. That’s down from a record 5.3 million just two years ago. The Labor Department reported 1.6 million total claims for jobless benefits in the latest week, down 5% from the previous week 17.4 million the year before.

The Conference Board said its index of leading economic indicators rose 0.3% in March, despite volatile stock prices and lower expectations from consumers and businesses. The broad gain signaled continued growth in the U.S. economy, the business research group said, although the war in Ukraine presents a speed bump. The Conference Board lowered its forecast for 2022 GDP growth to 3% from its pre-war projection of 3.5%. The group also cited ongoing challenges from supply disruptions, inflation, rising interest rates and a tight labor market.