Overall inflation remained at the highest level in more than 40 years in March. The Consumer Price Index, the broadest measure of inflation, rose 8.5% from March 2021, the biggest increase since December 1981, according to the Bureau of Labor Statistics. Compared to February, the CPI rose 1.2%, more than half of it attributed to an 18.3% rise in the price of gasoline. Food prices and housing costs also pushed the index higher. Excluding prices for volatile food and energy products, the core CPI rose 0.3% from February, decelerating for the second month in a row and slowing to the smallest gain since September. Year to year, the core CPI rose 6.5%, the most since August 1982. 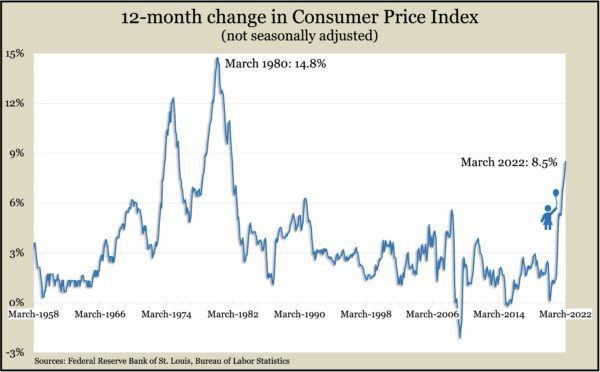 Inflation on the wholesale level also kept rising in March. with the Producer Price Index advancing 1.4% from the month before and 11.2% in the last year, both record highs in data going back to 2010. Energy prices accounted for more than half of a broad monthly increase of 2.3% in goods costs. Services prices rose 0.9%, led by increased margins for trade services, according to the Bureau of Labor Statistics. The core Producer Price Index, which excludes volatile prices for energy, food and trade, rose 0.9% from February and 7% from March 2021, the same 12-month rate as December and November.

The four-week moving average for initial unemployment claims rose for the first time in five weeks after hitting a 55-year low the week before. Claims averaged 172,500 in the most recent reading from the Labor Department, down 54% from the average level dating back to 1967. Altogether, 1.7 million Americans claimed jobless benefits in the most recent week, down 1% from the week before and down from 17 million at the same time the year before.

Higher gas prices helped pump U.S. retail spending in March. Total retail sales rose 0.5% from February for the third consecutive monthly gain and the seventh in eight months. Gas stations led the way, with sales advancing nearly 9% – a reflection of higher prices. Excluding gas stations, retail sales declined by 0.3% from February. Compared to the year before, gas station sales were up 37%, vs. 6.9% for all retailers. Also noteworthy, bars and restaurants continued to recover from the COVID pandemic, with sales rising 1% for the month and 19% since March 2021. 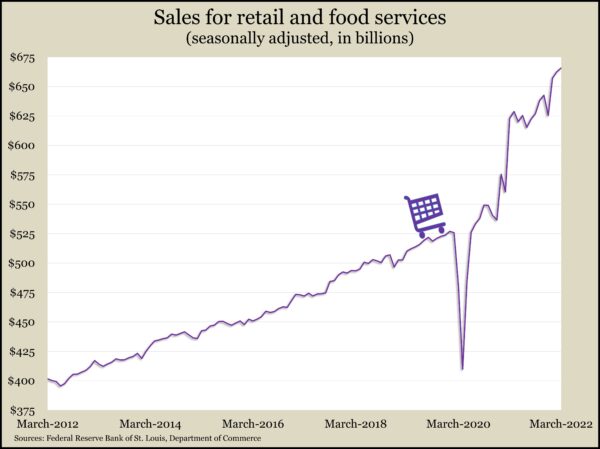 A preliminary April reading of consumer sentiment suggested Americans are slightly more optimistic about the future because of favorable conditions for workers and a belief that inflation will slow. The survey-based index from the University of Michigan said respondents 45 and younger expect wages to rise 5.3% in the next year, the highest forecast in more than 30 years. Consumers also anticipate lower gas price increases than they predicted in recent months. An economist with the survey called the gains in sentiment small and tentative and “still too close to recession lows to be reassuring.”

A report by the Federal Reserve showed industrial production rising to a record high in March, up 0.7% from February and more than 3% above its peak just before the pandemic. Manufacturing, mining and utilities all increased output in March, led by manufacturing, which benefited from a 7.8% rise in auto industry production. The capacity utilization rate for all industries rose to 78.3%, the highest since late 2018. That was still well below the 50-year average of 79.5%. Manufacturing capacity beat its long-term average for the first time since 2018 and reached its highest level since 2008.