The annual gain in housing prices accelerated in January for the first time since hitting a record high in August. According to the S&P CoreLogic Case-Shiller home price index, prices rose 19.2% nationwide since January 2021. In August, the year-to-year increase reached 20%, the fastest pace in 33 years of data. An economist with the index said price increases accelerated broadly in January, with 16 of the top 20 cities experiencing higher growth. The economist said the pace could start slowing soon in response to higher mortgage rates.

The Conference Board said its consumer confidence index advanced in March for the first time in three months. The business research group said attitudes improved toward current conditions, but expectations for coming months declined. The group said consumer confidence was “holding up remarkably well,” despite the war in Ukraine and anticipation of 7.9% inflation over the next year, an all-time high in Conference Board surveys.

Employer demand for workers remained elevated in February with 11.3 million job openings, the Bureau of Labor Services reported. The measure hit a record 11.4 million in December and is nearly twice the level of unemployed job seekers. The labor turnover report also showed that workers quit 4.4 million jobs in February, a sign that they are confident in finding other – presumably better – jobs.

The U.S. economy rose at an annual pace of 6.9% in the last quarter of 2021, according to a final estimate of the gross domestic product. The growth rate was down from 7% in the previous estimate by the Bureau of Economic Analysis, mostly because the annual rate of consumer spending grew by 2.5%, instead of the earlier estimate of 3.1%. Measured year to year, the economy rose 5.5% from the end of 2020. Adjusting for inflation, GDP was 3.1% higher than its pre-pandemic peak. The Federal Reserve’s favorite measure of inflation showed a 5.5% increase from the year before.

The four-week moving average for initial unemployment claims fell for the third week in a row and the seventh time in eight weeks, leveling off to where it had been before the pandemic. The level was 45% below the all-time rolling average for new claims. The four-week average of insured unemployment reached its lowest level since 1970. The Labor Department said 1.8 million Americans were claiming unemployment compensation in the latest week, one-tenth of what it was the year before.

By far the biggest driver of the U.S. economy, consumer spending rose 0.2% in February, compared to a 0.5% gain in personal income. The Bureau of Economic Analysis reported that adjusted for inflation, personal consumption declined for the third time in four months, although it was still 4.6% above where it was just before the pandemic began two years earlier. The Fed’s favorite inflation gauge jumped 6.4% from the year before, the biggest one-year increase since 1982. Month-to-month, core inflation – excluding energy and food prices – rose at the slowest pace since September. 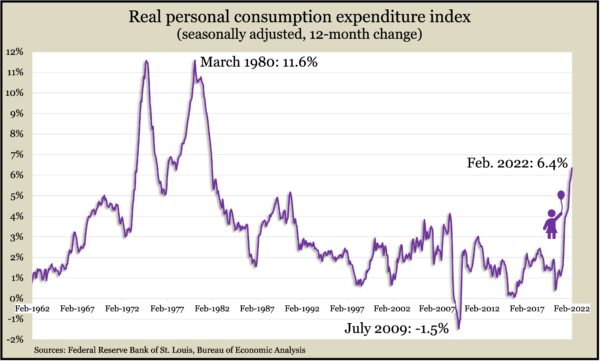 Employers added 431,000 jobs in March, down from a 562,000 average for the previous 15 months, but it edged U.S. payroll employment within 1.6 million jobs of where it left off before the pandemic. The leisure and hospitality industry added 26% of the jobs in March but was still 1.5 million or 8.7% short of its level two years ago. Meanwhile, the unemployment rate dipped to 3.6%, near its February 2020 rate of 3.5%. Some 5.7 million Americans were not in the labor force in March but wanted a job, according to household surveys, including 874,000 who said Covid prevented them from seeking work.

The Institute for Supply Management reported that its manufacturing index signaled expansion in March for the 22nd month in a row, though at the slowest pace since September 2020. Based on surveys of purchasing managers, the trade group cited signs of easing supply-chain congestion. It said its index correlated to a 2.9% annual growth rate for GDP.