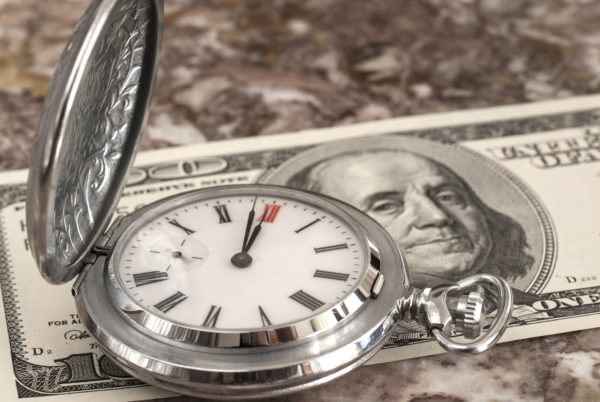 “Some advice here is don’t panic and make some extreme change to your investment style—either getting too aggressive or too conservative,” Dave says.

About 37% of workers fully retire earlier than they planned, according to a recent report from the Center for Retirement Research at Boston College. Factors that “shock” workers into retiring younger than expected are led by health reasons, the report said, followed by job loss, family concerns and financial considerations.

Similarly, the latest survey from the Employee Benefit Research Institute shows 43% of retirees leaving the work force earlier than planned, with 35% citing illness or disability and 35% blaming changes at their employer.

For whatever reasons retirees reach the end of their work lives—whether early or on plan, trusting sound investment practices remains key, Dave says.

“It may not be necessary to change your investment strategy,” Dave says. “Just don’t make a mistake by panicking one way or another.”

On the one hand, some early retirees might think they need to increase allocations to stocks, to be more aggressive about growing their holdings to cover extra years in retirement.

“And then on the other side,” Dave says, “I’ve had people say, ‘Oh, I’m going to need more from my portfolio. I’d better be more conservative and get a large allocation to cash lined up.’”

But Dave says investors need to maintain a balance between having part of their portfolio somewhat protected from market volatility so they can cover short-term expenses while also taking reasonable risk with some of their money so it continues to grow. Individual specifics vary, but a theoretical balance between 40% bonds and 60% stocks would make 10 years of 4% withdrawals available for spending from the bond portfolio.

Likewise, Dave cautions against tampering with investment withdrawal strategies, even when retirement dawns too soon. Early retirees might be tempted to withdraw more than 4% a year from their portfolio, but Dave says they would do so at the risk of depleting their investments before their retirement is over.

“The 4% withdrawal is intended to leave a legacy at the end because in theory your portfolio will continue to grow,” Dave says. “Some people don’t want that. It’s not their goal. Instead, they want to spend their savings down to zero. But that becomes a much more difficult proposition to project because you don’t know how long you are going to live.”

Rather than disrupting investment plans and withdrawal strategies, early retirees need to consider their other sources of retirement income, including Social Security. They also need to take a good look at their anticipated expenses, including health insurance— especially if they are not yet eligible for Medicare.

Dave runs simulations for clients to help project various scenarios, to form strategies for tapping their portfolios, to discuss when to start claiming Social Security benefits.

“Re-evaluating is important, looking at all your different strategies,” Dave says.” You have to be flexible. If your plans change, you’ve got to be prepared to also change.”

Which often means adjusting spending plans, Dave says: “Maybe it’s, ‘We’re not going to travel as much as we wanted or buy that lake home.’”

In nearly 30 years of retirement surveys, the Employee Benefit Research Institute consistently has found workers more optimistic about their prospects to work older than has been the experience of retirees. The latest survey shows 80% of workers expecting to work for pay in retirement, vs. 28% of retirees saying that they are paid for work.

“The message for the people who haven’t retired is make sure you have a contingency plan,” Dave says. “Don’t just run numbers based on your Utopia of making it to 65 or 68 or whatever it is. You may want to look at some scenarios in which you’re compelled to stop at 60 or 62. What does your life look like at that point? Where’s the income going to come from? How are you going to insure your health? What is your Social Security claiming strategy? You may not have the luxury of just letting it ride.”

Having a plan and doing the math also help inform investors when they can afford to retire, Dave says.

“I have had people where the other situation happened,” Dave says, “where they’re going for a goal, and they realize that they’re way overshooting what their needs are. After looking at projections and applying the 4% rule, they realize that they have already reached their goal. And then they retire early.”