Much of the optimism for the U.S. economy is the health of American consumers.

Consumers support the U.S. economy more than most other places. Consider: 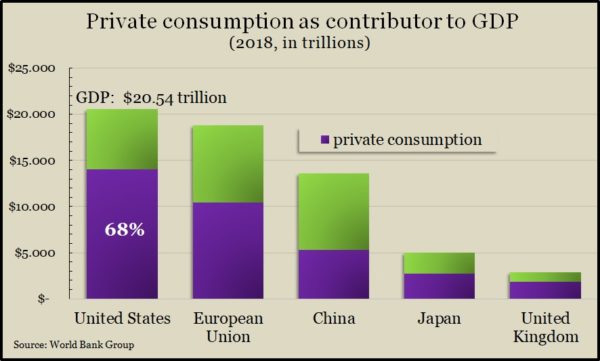 “The fundamentals supporting household spending are solid,” Federal Reserve Board Chair Jerome Powell remarked at the end of a two-day meeting of the Federal Open Market Committee in January. The Fed routinely cites the power of consumers as a reason for confidence.

Powell cited 50-year lows for unemployment, steady job gains, prime-age labor force participation and pay raises as supports for continued consumer spending. However, he also acknowledged a longer-range concern about income inequality by noting “the importance of sustaining the expansion so that the strong job market reaches more of those left behind.”

For all their clout, though, consumers can be capricious too.

“Consumer spending is fickle,” Bob Landaas said in a Money Talk Video. “It changes quite a bit month to month. It’s somewhat volatile.”

The testiness of consumers combined with the heft of their influence can make economic downturns nearly impossible to foretell, Bob explained.

“You’re trying to forecast a psychological reaction to a set of events. And that’s just really challenging,” Bob said. Whether it’s the domino effect of high-roller corporate bankruptcies in 2000 or the abrupt plummeting of home values in 2008, unexpected events can trigger consumer panic.

“Recessions aren’t caused by a specific data point. They’re not caused because some company goes down one morning or an index of leading economic indicators collapses,” Bob said. “They’re caused because of a crisis of confidence, and those are really challenging to predict.”

So, though consumers are a source of assurance in the continued record expansion of the U.S. economy, they’re also a reason for caution, which is another reason why, Kyle Tetting said, investors need to position themselves for the unexpected.

“It’s so important for investors to have that balanced portfolio,” Kyle said in a Money Talk Video. “because it allows them to get through those periods of uncertainty without giving up entirely and without trying to figure out when the turn is going to come.”