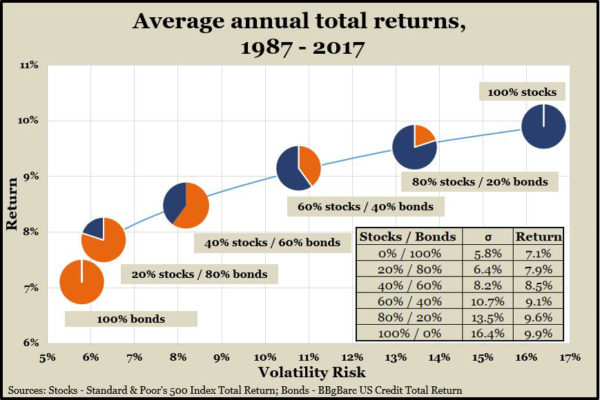 Riding a surfboard requires coordination, balance and risk analysis. The more you want to catch the big waves, the more prepared you should be to get knocked off your board.

Investing also involves maintaining equilibrium amid ever-changing conditions. In general, higher returns reward bigger risks, but there’s a point at which you can optimize your expectations without undue peril.

Gains from stocks historically outpace benefits from bonds. The ride is bumpier for stock investments, with wilder fluctuations in price. But that’s a risk that investors should take only after considering that over the long run, stocks tend to offer greater payback.

Economic research – including work that led to a Nobel Prize – has found that portfolios can reach an efficient frontier in the balance between risk and return at which the potential return flattens out even as the risks keep growing.

For instance, the graphic below shows how increasing the proportion of stocks in your holdings would have raised your overall investment returns in the last 30 years. But, once you got beyond a mix of about 40% stocks to 60% bonds, your gains would have been slight given the escalated risks that your investments would deviate far from the overall market performance.

The Nobel Prize announcement for Markowitz

In the 1950s, American economist Harry Markowitz developed the mathematics of diversifying investments according to expected returns and risks. At the time, one of his professors at the University of Chicago, Milton Friedman, questioned whether Markowitz’s stock market study of “rational behavior under uncertainty” qualified as economics.

Nearly 40 years later, the Royal Swedish Academy of Sciences named Markowitz a winner of the 1990 Nobel Prize in economics and heralded Markowitz’s portfolio theory as “the first pioneering contribution in the field of financial economics.”
Markowitz laid the foundation for quantifying the benefits of having an investment portfolio diversified in an array of assets that balances return and risk, growth and loss.

Managing investments requires a relentless effort to maintain balance, says Steve Giles, a vice president and advisor at Landaas & Company.
Giles routinely explains the concepts of efficient frontiers in discussing with clients how to optimize growth while controlling for risk.

“Most people want to see investments in terms of return. We try to help our clients view their investments from a risk standpoint,” Giles says. Back to the surfing analogy, Giles works at keeping clients on their boards so they can be in a position to ride the waves.

“We manage more for the downside protection,” Giles says, “than we do for the upside potential.”