Only 37% of Americans believe the next generation will be better off. And it turns out that I am party to the pessimism.

According to new data from the Pew Research Center, 58% of Americans see the country’s current economic situation as good. That exceeds the median among 18 countries surveyed and is up from 44% last year and 40% in 2015.

Over the same period, though, there has been comparatively no improvement in the percentage of Americans expecting today’s children to grow up better off financially than their parents.

That puzzles me. A primal mission throughout the ages has been to make the next generation better off. For eons, our forebears have sacrificed – crossed oceans, endured hardships, surrendered lives – for our benefit. You don’t have to look far to see examples of such efforts every day.

And yet, even as we feel better about our economy, we’re not more upbeat about what’s ahead for our progeny. Researchers note that some survey respondents were more optimistic than others. Results vary by:

The widest variable for Americans is age. Overall, 37% of us see our children growing up better off, but it dips to 32% among those 50 and older. 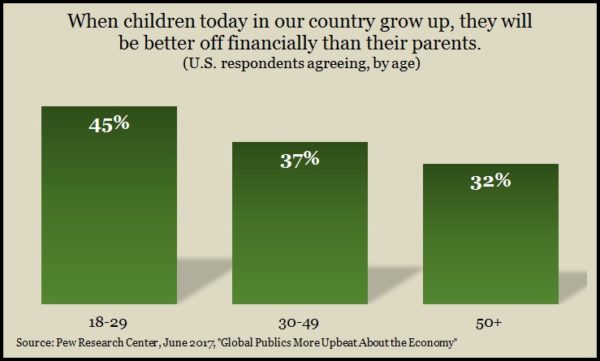 Blame it on us baby boomers. More than 25 years of surveys by Pew have painted those of us born between been 1946 and 1964 as “the gloomiest generation.”

Of course, any group that includes 75 million people is not a monolith. Many of us share little more than coincident conceptions. But there is some context for our generation’s resemblance to a donkey named Eeyore.

Those are older surveys, of course. Since then, most of us have watched our assets recover and rise in what is now the second-longest bull market in history. Accordingly, we have readjusted our intentions for retirement.

Still, many of us are scarred and skittish. The proportion of Americans not confident that they’ll have enough money for retirement remains higher than any time prior to the recession, according to the 2017 report from the Employee Benefit Research Institute.

So, the reason we don’t have sunnier forecasts for the next generation reflects our own stormy experience. But let’s not confuse expectations with wishes. Being pessimistic doesn’t mean we can’t be supportive.

Who’s when?
Definitions vary. Here are the generational birth years used by the Pew Research Center.

In fact, Pew research suggests our cynicism is generalized. Even if our outlook is mostly cloudy for the next generation overall, we see nothing but blue skies for our own children. Part of that optimism closer to home is because that’s where we can make a difference.

In a Money Talk article on coping with college debt, Paige Radke listed ways boomer parents can boost their children’s financial future by helping them become more independent. Similarly, Brian Kilb suggested how boomers facing retirement can handle the intergenerational squeeze of being in the sandwich generation.

Among the tips for boomers:

Take care of your money. You have greater urgency to build and preserve the wealth needed for old age. Put your retirement first. It’s like the oxygen masks on airplanes. You’re of little use to others if you can’t breathe.

Take care of yourself. If you’re in good health, you can be more helpful to your children for more years. You can enjoy one another’s company longer. You can spend less on medical costs.

Be creative. Find constructive ways to support your children that don’t rob your retirement funds but help develop their money management skills, which can serve them beyond your retirement.

Be patient. Some of the boomer pessimism comes from inapt comparisons between generations. Recognize that as times change, how we measure success and how we attain it can change too. Sometimes we need to adjust our expectations.

Pessimism isn’t bad if we use it as a motivator, if we ask, “What do we have to do to feel better about this?” Each generation faces challenges. They always have. And the challenges are different from one to the next. The best we can do is prepare for the worst and learn together as we journey on.