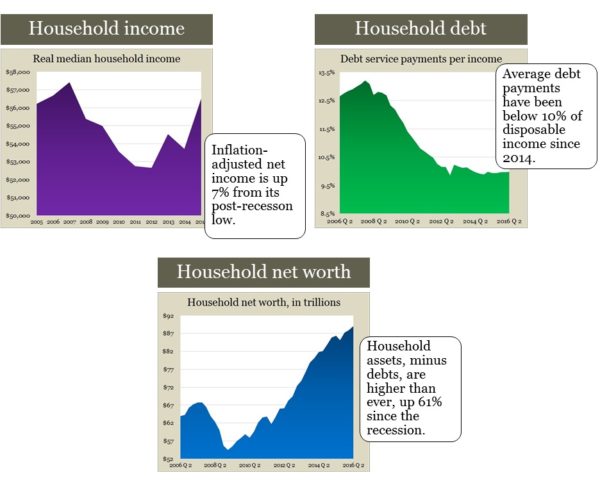 Consumer spending drives nearly 70% of our economy, so the ongoing wellness of consumers is key to sustaining economic growth. More than seven years after the Great Recession, American consumers’ finances overall are in good shape.

To investors, a healthy consumer can translate into higher corporate profits and, ultimately, higher stock prices. It also speaks to the longevity of the business cycle. Here are factors influencing consumer spending:

Real (inflation-adjusted) median household income rose 5.2% in 2015 and is approaching its pre-recession high. The measure gained for the second time in three years after five consecutive declines. Bolstered by a strong job market, wages rising faster than inflation are a key driver of consumer spending and sustainable, long-term economic growth.

Consumers have been using historically low interest rates to reduce their debt and lower payments. On average, consumers are spending less than 10% of their disposable income on debt, one of the lowest readings on record.

Assets are up, and debts are down. Americans’ total net worth – total assets minus liabilities – exceeds $89 trillion, the highest ever. That suggests a healthier attitude toward debt and savings, in stark contrast to a decade ago. As wealth increases, a rise in consumer spending usually follows. Economists refer to this as the wealth effect.

With oil costs half of what they were in 2014, consumers also are spending less at the gas pump, which allows them to spend more elsewhere – or to save.

As with the overall economy, consumer spending has been growing at a slower pace than its historical average, but the personal savings rate remains elevated from pre-recession lows. And while saving and paying down debt may not boost the economy in the short-term, it does boost the potential for higher economic output down the road.