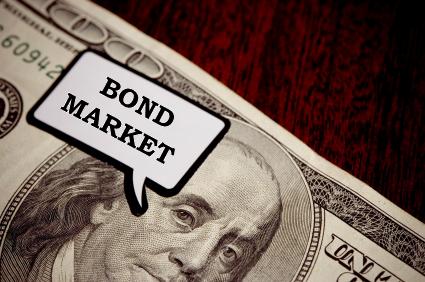 To foster financial literacy, our weekly podcasts regularly feature discussions on common terms and concepts used in personal finance and investing. Here’s an edited transcript of a conversation about the bond market with Bob Landaas, Steve Giles and Brian Kilb.

Bob: Bonds, in essence, are loans. It’s different from a stock, where you own a piece of the company. If you have a bond, you’re lending.

Corporate bonds are loans to a company. With a municipal bond, you lend money to a state or local governmental unit. In Treasury obligations, you’re lending money to the federal government.

There are two things that you care about in the bond market: interest rate risk and credit risk.

Say you get a bond paying 4% interest. And then a year later, interest rates drop to 3%, and somebody else wants to buy a bond. They’re going to try to talk you out of your 4% bond, because they’re only going to get 3%. So you’re going to be able to increase the asking price of your bond to be compensated for the fact that it’s above the market interest rate. So if interest rates go down after you buy your bond, you look pretty smart.

The math is easy. You multiply the change in interest rate times duration of the bond, and that explains price movement.

In the case above, if your 4% bond went out four years and the rate dropped to 3%, multiply the percentage point by four years, and the price of your bond just went up 4%.

So if interest rates are starting to go up, you want to reduce the durations of your bonds. Interest rate risk is difficult to get around. Most of the pros say you don’t want to get out past seven years. Past seven years, the bond market becomes pretty volatile.

The second issue in the bond market is credit risk. The higher the yield, the less likely it is the company or agency or government unit is going to pay you back. The lower the yield, the better the chance that you’ll be paid back.

Start with the U.S. Treasuries. They’re the benchmark – the rate that we compare everything else to. Treasuries are the safest debt instruments on earth.

Then, a notch above the underlying Treasury rate – typically about a quarter to a half percentage point higher – are government agency bonds such as those from Fannie Mae, Freddie Mac and the FHA.

Most corporations don’t have AAA ratings. The yields on their bonds typically are about three-quarters of a percentage point to one and a half percentage points above the underlying Treasury yield.

Then we go to junk bonds – non-investment grade bonds. There, the spread is normally going to be 500 basis points or five percentage points above the Treasury rate.

Steve: You want to diversify your bond holdings.

In the stock market, we always try to build balanced portfolios encompassing large-and small-cap stocks, growth and value stocks, international and so on.

“Bonds and Fixed Investments,” from the Financial Industry Regulatory Authority

“Learning to Invest, Part 5 – Intro to Bonds,” from the Financial Industry Regulatory Authority

“Always Room for Bonds,” by Art Rothschild, with links to other Landaas & Company articles on bonds

Make sure the bond side of your portfolio has some shorter-term bonds, longer-term bonds, a mix of investment-grade quality bonds as well as some international. You can even throw in Treasury Inflation-Protected Securities for added diversification.

Don’t fall victim to having just one bond fund and thinking that you’re sufficiently diversified.

Bob: Another point is that interest rates typically move in cycles of four to five years. In a recession, the Fed lowers rates to encourage business activity. Half-way through, interest rates start going up as the Fed gets concerned about inflation. Then rates rise enough to solve inflation but create another recession. And we’re back to square one.

Against that is a backdrop of longer-term secular patterns of interest rates. In the summer of 1980, the prime lending rate hit 18.5%, and we’ve basically been going down ever since. I would contend that at some point maybe in the next year rates will have effectively bottomed and, on a secular basis, we could be spending the next 10 or 15 years – maybe even longer – with rates gradually going up.

Brian: You always need to consider what you’re trying to do with different asset classes. Bonds are in your portfolio primarily for safety. They’re to reduce volatility, to generate income. They’re a stable part of your portfolio when we go through highly volatile periods like those we’ve been through in the past few years.

Considering how low interest rates are and the probability that they’ll drift higher over a longer period, expect lesser return from your bond portfolio in the years ahead.

There’s going to be a day when somebody comes into my office and says, “My goodness, I made a lot of money from stocks, how come I have these awful bonds?” That’s when you remember the purpose of the bonds, which is to provide stability and income in your portfolio.

Bob: On a big-picture basis, we also use bonds in a portfolio to facilitate correlation theory.

Historically, at least for the last 25 years, when stocks get hit, bonds go up – and vice versa. Bonds serve a very practical role in balancing risk in portfolios.

Studies have shown that people who have about half their money in stocks and half their money in bonds do the best over time because they’re able to weather the storms and the selloffs in the stock market and benefit from the stability of fixed income.