U.S. manufacturing got a surprisingly large boost in August, according to the Institute for Supply Management. The trade group’s index rose to its highest level since June 2011, more than analysts expected, with new orders, production and employment all growing at a faster pace.

The housing recovery continued in July, as the annual rate of construction expenditures reached its highest point since June 2009. The Commerce Department reported investments in residential structures rose 16.8% from the year before. 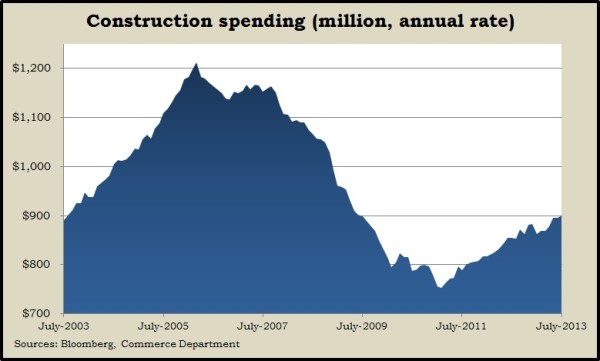 The U.S. trade gap widened to $39.1 billion in July, more than expected and a 13% increase from June, which was the shallowest deficit since Oct. 2009. According to data from the Bureau of Economic Analysis, July exports fell 0.6%, suggesting weakened overseas markets, while imports rose 1.6%, pointing to stronger U.S. spending. Excluding petroleum, the trade gap grew by 19%. The deficit with China widened by 13% to $30.1 billion.

Americans bought motor vehicles in August at a faster pace than any month since November 2010, Auto Data Corp. reported. Dealers sold an annual rate of 16.1 million vehicles for the month, up 1.8% from July and up more than 11% from August 2011. Imported trucks led the sales growth.

Employers reluctant to add to their payrolls were able to get more productivity out of their existing workforce in the second quarter, according to revised data from the Bureau of Labor Statistics. Output per hour increased at an annual rate of 2.3%, as employees worked 1.4% more hours and output rose 3.7%. Measured over the last four quarters, productivity gained a scant 0.3%.

The moving four-week average for initial unemployment claims fell for the seventh time in eight weeks dropping to the lowest level since October 2007. Jobless applications continued to reflect employers’ aversion to letting workers go. Claims were down 50% from the year before.

Following its report Monday on manufacturing prospects, the Institute for Supply Management said non-manufacturing also continues to grow. The trade association’s index covering industries employing 90% of the U.S. workforce hit its highest mark since December 2005, including a big jump in the employment component. Purchasing managers surveyed for the index expressed optimism about current business conditions and the direction of the economy overall.

The Commerce Department said factory orders declined by 2.4% in July. That’s less of a drop than analysts had expected after a particularly strong June as well as gains in April and May. Demand fell most for commercial aircraft. Excluding the volatile transportation industry, orders rose 1.2%.

Employers added fewer jobs than expected in August and not as many as previously estimated in June and July. The Bureau of Labor Statistics reported 169,000 jobs gained in August, just below the 12-month average of 180,000. Retailers, health care and food services continued to lead the hiring. Temporary help positions, considered a leading indicator of future hiring, also rose again. The unemployment rate slipped to 7.3% from 7.4% in July and 8.1% in August 2012, but economists said the monthly decline has less to do with applicants finding work and more to do with job seekers dropping out.