Contracts for home sales fell 4.8% in August to an annual pace of 5.31 million houses, the first slowdown in four months, the National Association of Realtors reported. The trade association complained of a limited supply of existing houses for sale as well as not enough new construction. The sales rate of existing houses remained above year-ago level, showing that the housing recovery still has momentum.

The annual rate of new-home sales grew 5.7% to 552,000 houses in August, the fastest pace since February 2008. The departments of Commerce and Housing and Urban Development reported that the supply of new houses for sale dropped to the lowest point in six months, which could pressure higher prices and motivate more housing construction. 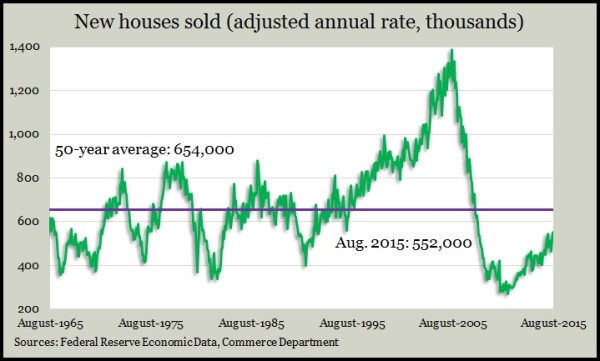 The four-week moving average of initial unemployment claims fell for the second week in a row, nearing the 15-year low set in early August. The Labor Department indicator has remained below the 48-year average ever since the beginning of 2013, suggesting that employers continue to be busy enough that they are reluctant to let workers go.

The U.S. economy grew at a 3.9% annual pace in the second quarter, rebounding from the paltry 0.6% gain registered in the first three months of the year. The Bureau of Economic Analysis said the Gross Domestic Product received more help from consumer spending and construction than previously estimated. Consumer spending rose at a 3.6% annual clip, and inflation gained for the first time in three quarters, edging up around the Federal Reserve Board’s target of 2%.

Although it strengthened from a preliminary mid-month reading, consumer sentiment ended September at its lowest point in 11 months, according to the University of Michigan. Economists watch consumer sentiment as a harbinger of the personal spending that drives about 70% of the gross domestic product. A Michigan economist who works on the survey interpreted the latest results as a sign that more consumers are starting to acknowledge how the global economy can impinge on their prospects for work and wages, even aside from how it affects financial markets.