Inflation remained relatively high in August, though it receded from recent levels. The Bureau of Labor Statistics said the Consumer Price Index added 0.3% from July, the lowest in seven months. The 12-month inflation rate was 5.3%, down from a 13-year high of 5.4% in July and June. Gasoline prices led the monthly CPI increase with a 2.8% gain. Gas was up nearly 43% from August 2020. Excluding volatile food and energy prices, the core CPI added 0.1% in August, compared to a 0.7% average in the previous four months. Year to year, the core CPI was up 4%, after reaching 4.5% in June, the highest since 1991.

U.S. industrial output rose 0.4% in August, finally exceeding levels 18 months earlier, before the pandemic, according to the Federal Reserve. Overall production would have risen 0.7% if not for shutdowns caused by Hurricane Ida, the Fed said. Manufacturing output advanced 0.2%, half of what it would have without the hurricane. Mining production, including the oil industry, declined 0.6%. Utilities output jumped 3.3% because of unseasonably warm weather. Capacity utilization rose to 76.4%, also topping its February 2020 level after falling to an all-time low of 63.4% in April 2020. An early indicator of inflationary pressure, capacity usage has reached the long-term average of 79.6% only twice in more than 13 years. 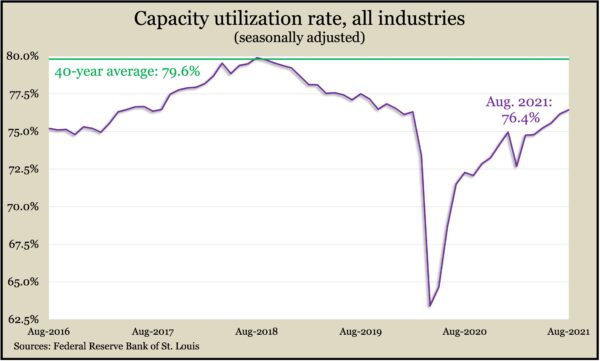 The Commerce Department reported a 0.7% rise in retail sales in August, led by online stores, where sales grew 5.3% from July. Sales declined for the month only at car dealers and stores for appliances and sporting goods. Total retail sales were 17.7% above of the pre-pandemic level, the 14th month in a row above the February 2020 mark. Spending at bars and restaurants was unchanged from July, amid repercussions from Hurricane Ida and the delta variant of COVID-19. Still, bars and restaurant sales were 8.7% higher than before the pandemic. 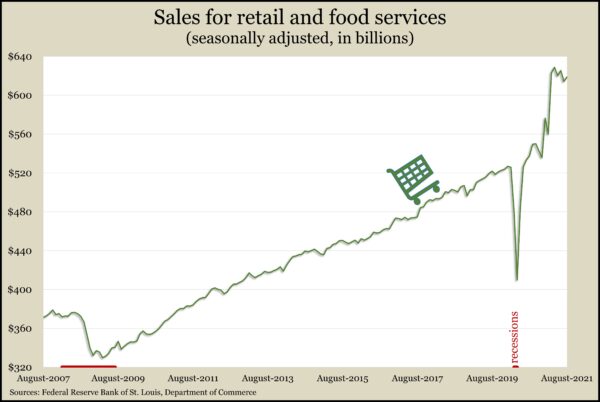 The four-week moving average for initial unemployment claims fell for the fifth week in a row to reach the lowest level since mid-March 2020 and 10% below the 54-year average. According to Labor Department data, the average moved to 335,750 new applications, down from a record 5.3 million in April 2020 but up from the 225,000 just before the pandemic, the lowest level since 1969. Some 12.1 million Americans claimed jobless benefits in the latest week, although 77% of the claims were tied to expiring pandemic relief programs.

Consumer sentiment rebounded slightly from its plunge in August, the University of Michigan reported. A preliminary look at survey data for September showed attitudes toward buying houses, cars and durable household goods dropped near the lowest readings in more than 50 years of data. A university economist said the recent downturn in consumer feelings was based more on emotions than economics but has resulted in forecasts for slower growth for consumer spending and home buying through the end of 2021.