The U.S. housing industry continued to bounce back in September with growth in the annual pace of both housing starts and building permits. Building permits, an indicator of future construction, even surpassed its January level, which was the highest since the Great Recession, according to data from the Commerce Department. With the sustainability of existing-home sales challenged by lack of inventory, September’s housing start data suggested good news. Single-family housing starts jumped to their highest rate since June 2007. Building permits for single-family residences increased for the fifth month in a row to the highest level since March 2007. 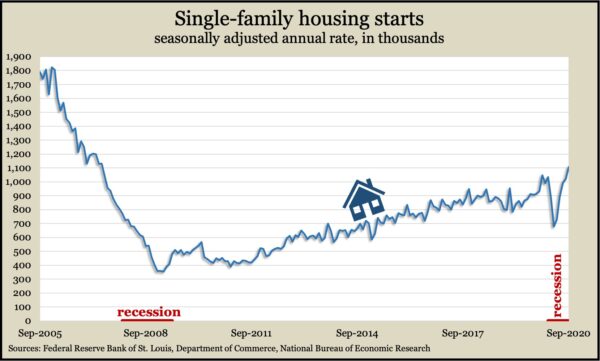 The four-week moving average for initial unemployment claims declined for the 12th week in a row, dropping to 811,250 after reaching nearly 5.8 million in April. But the weekly indicator of layoffs remained well above the pre-pandemic record of less than 700,000. In February, it reached a 50-year low of 208,000. Data from the Labor Department shows more than 23 million ongoing claims for jobless benefits, up from 1.4 million the year before.

In another sign of housing expansion, existing home sales rose for the fourth month in a row in September to an annual rate of 6.5 million houses, up 9.4% from August and 20.9% above the year-ago pace. The National Association 0f Realtors cited a surge in demand from low mortgage rates and the pandemic-induced work-from-home trend. The trade group said vacation-area home sales were up 34% from the year before. The typical house was on the market for 21 days, a record low. Meanwhile, inventory dropped to a record low of 2.7 months, based on the current sales rate.

The Conference Board said its index of leading economic indicators rose 0.7% in September following gains of 1.4% in August and 2% in July. The business research group said the narrowing increases suggest the recovery is losing steam and could face risks in coming months from weak labor market conditions and a resurgence in coronavirus cases.