The Federal Reserve reported that industrial production declined 1.3% in September following a 0.1% drop in August. A 7.2% fall in output from automakers led the setback, blamed on an ongoing shortage of semiconductors. Even aside from motor vehicles, manufacturing production fell 0.3%. The September output from utilities fell after an unseasonably warm August increased use of air conditioners. Capacity utilization, a measure of potential inflation, fell for the second month in a row to the lowest level since April. At 75.2% of total capacity, U.S. industrial operations stayed below the long-term average of 79.6%. At higher levels, the capacity utilization rate suggests pressure for inflation. 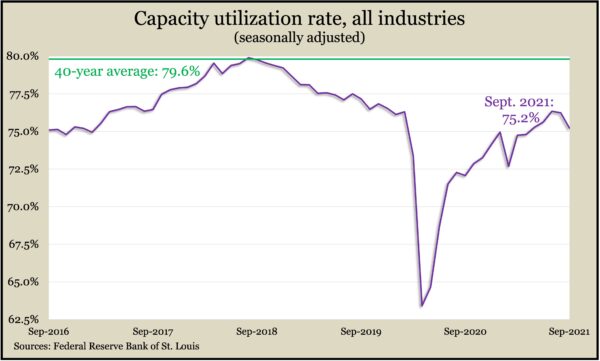 The U.S. housing market cooled from recent peaks but remained near levels not seen in 14 years, according to September estimates of housing starts and building permits. The Commerce Department said the annual rates of both new construction and future authorizations declined from August. Both measures tend to be volatile month to month, even with seasonal adjustments. Total housing starts as well as single-family starts hit their lowest levels since March but topped their marks just before the Great Recession. Housing permits, an indicator of commitments to future homebuilding, dropped to their lowest level in a year but also remained around where they were in 2007.

The four-week moving average for initial unemployment claims fell for the second week in a row, continuing to reflect the resurgence in labor demand. The average of 319,750 was at its lowest point since just before the pandemic, 14% below the all-time average. But it still was up 53% from where it was in February 2020. According to Labor Department data, total jobless claims fell to about 3.5 million in the latest week, down 10% from the week before as around 350,000 claims dropped from the rolls because of the expiration of pandemic relief programs. The year before, total claims approached 24 million.

The pace of existing home sales rebounded 7% in September after declining in August. Houses sold at an annual rate of 6.2 million, the National Association of Realtors said, down 2.3% from the pace in September 2020. The trade group said anticipation of rising mortgage rates fueled demand from buyers. Inventory woes continued with the number of houses for sale in September dropping below 1.3 million, down 0.8% from August and 13% from the year-ago mark. The low supply helped boost the median sales price to $352,800, the Realtors reported. That was up 13% from the year before, the 115th consecutive price increase.

The Conference Board said its index of leading economic indicators rose 0.2% in September after gains of 0.8% in August and 0.9% in July. Despite the deceleration, the business research group said indicators suggested continued broad growth in the economy amid challenges from the delta Covid variant, inflation fears and supply-chain disruptions. The group forecast a 5.7% economic expansion for the U.S. for 2021 and a 3.8% increase in 2022.