The Commerce Department reported that wholesale inventories grew at a slower pace in August, a sign that producers may be trying to align their stockpiles with declining global demand. Inventories rose more than analysts expected, but sales also increased, the first such advance in three months and the most since February. As a result the ratio of inventories to sales dipped, which indicates manufacturers have better control.

The slowdown in global growth showed in August’s trade deficit, which grew wider than expected. The Bureau of Economic Analysis reported that exports fell much more than imports declined. The net effect was a 4% increase in the deficit to $44.2 billion. 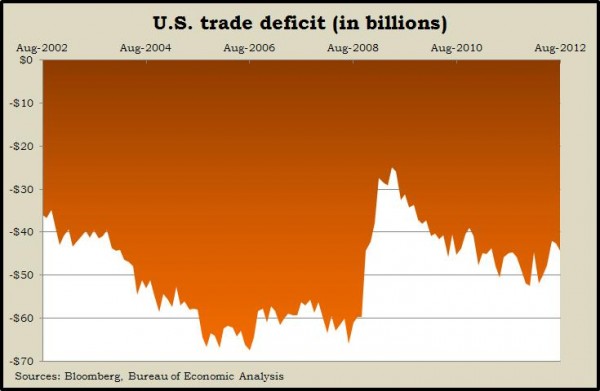 Another indicator of a slowdown in the global economy is demand for commodities, which can affect prices at the wholesale level. The primary measure of that is the Producer Price Index, which rose a little more than analysts expected in September, largely because of higher energy costs such as gasoline. Still, fuel costs didn’t increase as much as in August, and the core wholesale inflation rate – which separates out volatile food and energy costs – were unchanged. Year-to-year core wholesale costs rose 2.3% in September, the lowest rate in 15 months.