In a possible sign of consumers’ reluctance to spend, credit card debt declined in August, according to a Federal Reserve report. Total consumer debt outstanding, including car financing and student loans, rose by $17.9 billion, an annual rate of 5.2%. However, the closely watched revolving credit debt, reflecting credit card use, declined at an annual rate of 2.2%, the second drop in three months. Fed officials lately have identified consumer spending as one of the strengths of the economy. Such spending drives about two-thirds of economic growth.

Prices on the wholesale level took an unexpected dip in September. The Bureau of Labor Statistics said the Producer Price Index declined 0.3% from August. It was unchanged when excluding volatile prices for food, energy and trade services. The total index rose 1.4% from September 2018, the lowest year-to-year wholesale inflation since 2016. The core index rose 1.7% from the year before, down from 1.9% in August, suggesting softening economic growth.

Though still elevated historically, the number of job openings declined in August for the third month in a row. The level of help wanted fell to its lowest point since March 2018. The 7.1 million openings were still within 8% of the all-time peak set last November. For the 18th month in a row, openings outnumbered unemployed job seekers, continuing to signal strong hiring conditions, which should encourage consumer spending. 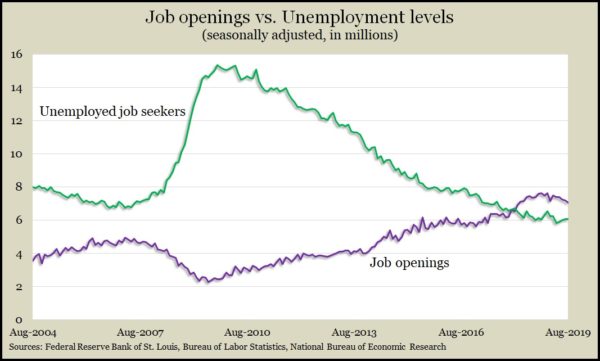 The nation’s wholesalers stockpiled fewer supplies in August than analysts expected, but inventory levels rose 0.2%, outmatching sales, which were unchanged, according to the Commerce Department. The inventories-to-sales ratio, a gauge of how lean businesses are operating, didn’t change from July. Year-to-year, wholesale inventories were up 6.2% while sales had declined 0.7%, suggesting that supply and demands are out of sync.

The broadest measure of inflation, the Consumer Price Index, was unchanged in September. Increases in shelter costs and food prices offset lower prices for energy and used vehicles. Since September 2017, the CPI rose 1.7%, the same 12-month rate as August. Excluding volatile energy and food costs, the CPI grew 2.4% from the year before, also the same as in August. Based on the data from the Bureau of Labor Statistics, the Social Security Administration announced a 1.6% raise in monthly benefits for 2020. 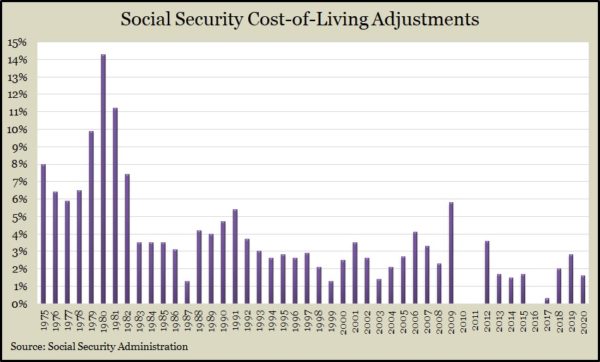 The four-week moving average for initial unemployment claims rose for the second week in a row after three consecutive declines. Data from the Labor Department show new jobless applications are 39% below the 52-year average. Claims have been below average every week since 2013, underscoring a tight labor market that should encourage consumers to spend more.

The University of Michigan said its preliminary consumer sentiment reading for October rose. Between expectations for higher personal earnings and lower inflation, consumers’ outlook for real income rose to the highest level in two decades. At the same time, surveys showed consumers expect continued economic slowdown, though they were less worried about trade tensions and relatively unconcerned about a negative impact from impeachment investigations involving President Trump.