The non-manufacturing sector expanded for the 105th month in a row in October, according to the Institute for Supply Management. The ISM non-manufacturing index declined from a record mark in September, registering slower growth in most of its components. Purchase managers interviewed for the monthly survey expressed concerns about keeping up with demand as well as uncertainties over international trade issues. The ISM said the index suggested annual gross domestic product (GDP) growth of 4.1%.

U.S. employers had more than 7 million job openings in September, down from a record 7.3 million in August, signaling continued elevated demand for workers. The Bureau of Labor Statistics said the number of Americans hired in September also declined from a record high in August. The rate of workers quitting their jobs – an indication of confidence that they can find better opportunities – remained at a record level. As demand outstrips supply in the labor force, consumer confidence and increased pay are expected to fuel consumer spending, which drives two-thirds of GDP. 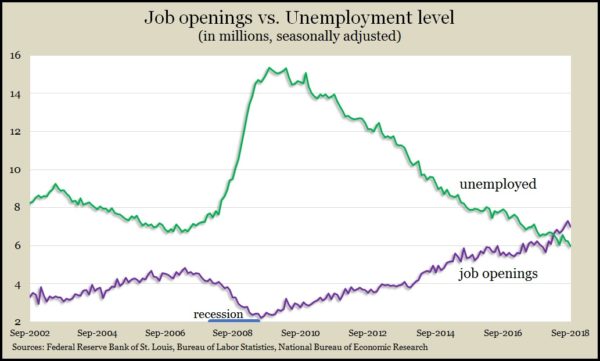 American consumers used their credit cards less in September, according to the Federal Reserve Board. Credit card debt outstanding declined by $300 million, or an annual rate of 0.4% from August, the fifth decline in eight months. Overall, consumer credit rose $10.9 billion in September, a 3.3% annual rate, because of increased borrowing for college and cars.

In another sign of a historically strong employment market, initial claims for unemployment insurance remained near the lowest levels in 49 years. The four-week moving average declined for the first time in seven weeks, following interference from hurricanes along the Gulf Coast. According to data from the Labor Department, the level has stayed below the 51-year average every week since January 2013, suggesting employer reluctance to let workers go.

Inflation at the wholesale level jumped higher than analysts expected in October. The Producers Price Index rose 0.6%, the most in six years, according to the Bureau of Labor Statistics. Costs for trade services especially but also food and energy were behind the gain. Excluding those three volatile components, the core index rose 0.2%, as expected. Year-to-year, the headline PPI showed 2.9% inflation, which was the highest since the recession. The less-volatile core index rose 2.8% from October 2017, down from 2.9% in September.

A preliminary gauge of consumer sentiment suggested continued optimism about household income in November. Based on a long-standing survey from the University of Michigan, the sentiment index declined slightly from where it ended October but suggested consumers’ collective outlook in 2018 is the highest it has been in 18 years. Working-age households expect a 3.6% gain in income in the next year, which is the highest estimate since the recession.

The Commerce Department said wholesale inventories rose 0.4% in September, outpacing the 0.2% increase in sales. Year-to-year, though, demand stayed ahead of supply with sales rising 7.8% and inventories gaining 5.2%. Increased inventories add to the calculation for GDP. If inventories get too far ahead of sales, businesses risk disrupting their production and employment when demand slackens. For September, the ratio between inventories and sales was unchanged from August.