For the second straight month, construction spending declined, suggesting a continued see-saw recovery for the industry. The Commerce Department reported that residential building rose a smidge for the first time in five months, led by single-family housing construction. Overall, construction spending has plateaued since May when it hit a post-recession high.

Factory work kept growing in October, according to the Institute for Supply Management’s manufacturing index. The index tied with August for the highest reading since March 2011, showing manufacturing expanding for the 17th month in a row. The oil and coal was the only one of 18 industries reporting contraction.

With pent-up demand, low interest rates and cheap gas, motor vehicle sales reached an annual pace of nearly 16.5 million cars and trucks in October. AutoData Corp., reported that sales were slightly brisker than the month before as well as the 12-month average. Cars outpaced trucks in October, but trucks were selling faster than cars year-to-year.

The global economic slowdown weakened demand for U.S. exports in September, at the same time U.S. imports of oil continued to decline. The result was a widened trade deficit of $43 billion, the biggest gap in four months. The Bureau of Economic Analysis said oil imports sunk to their lowest level in five years as prices have fallen and U.S. energy production has grown. 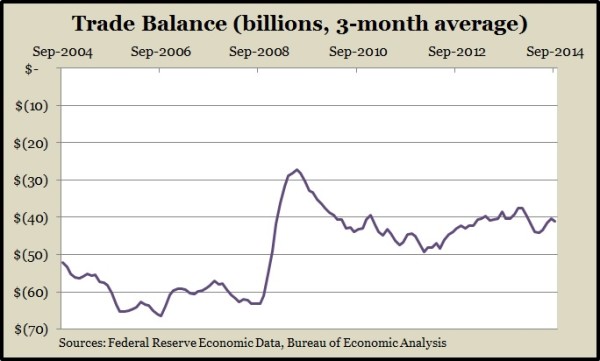 The Institute for Supply Management said its non-manufacturing index for October showed slower growth for the second month in a row after reaching an all-time high in August. The pace of most of the indicator’s components declined slightly while signaling the 57th consecutive month of expansion. Employment grew more briskly, reaching the third-highest level in 17 years. Industries covered by the index account for about 90% of the U.S. economy.

The moving four-week average for initial unemployment claims dipped for the seventh time in eight weeks, reaching the lowest level since April 2000, according to the Labor Department. New jobless claims have stayed below the 47-year average since the end of 2012, indicating that employers have been reluctant to let workers go.

U.S. productivity rose in the third quarter for the fourth time in five quarters, the Bureau of Labor Statistics reported. A preliminary estimate has productivity slowing slightly from the second quarter, which was a rebound from the weather-inhibited first quarter. In the latest period, output increased at an annual rate of 4.4% rate while worker hours rose 2.3%. Labor costs grew at a slight rate of 0.3%, suggesting enough slack yet in the work force that inflation isn’t an imminent threat.

U.S. employers added fewer jobs in October than analysts had expected but continued to make encouraging gains. Restaurants, stores and medical offices were among the places hiring but also factories, warehouses and construction sites, according to the Bureau of Labor Statistics. The average workweek ticked up, and the unemployment rate unexpectedly edged down to 5.8%, the lowest rate since July 2008. Average wage increases remained just barely above the low inflation rate.

Student loans and car financing again contributed to rising consumer credit in September, according to the Federal Reserve. Outstanding credit increased by $15.9 billion from August. Credit card debt increased 2% after contracting in August, a sign that consumers are weighing their appetites for shopping against their willingness to risk more debt.