The U.S. housing market continued to slow in September, according to the S&P/Case-Shiller home price index. The 20-city composite index gained 5.1% from September 2017, which was lower than analysts expected and down from a 5.5% gain in August. Of the 20 cities, 16 had narrower year-to-year price gains. A housing economist for Standard & Poor’s noted that besides slower price increases, reports of home sales – both new and existing structures – peaked in November 2017. Since then, he said, housing starts have declined 8.7%.

The Conference Board’s consumer confidence index fell in November from an 18-month high in October. Optimism for current conditions remained elevated, which bodes well for end-of-the-year consumer spending. Expectations for the next several months declined slightly over prospects for employment and income. The business research organization sees continued solid economic growth into early 2019, although the pace could slow if expectations continue to moderate.

The U.S. economy grew at a 3.5% annual rate in the third quarter, unchanged from an earlier estimate and the strongest third quarter in four years. Growth in the gross domestic product slowed from a 4.2% pace in the second quarter, according to the Bureau of Economic Analysis. Consumer spending – which accounts for about two-thirds of GDP – rose at a 3.6% annual rate, down from 4% in the initial estimate. The Federal Reserve’s favorite measure of inflation rose at a 1.5% rate, below the Fed’s target rate of 2%.

Another sign of a stagnating housing market was lower-than-expected sales of new houses in October. The Commerce Department said the annual pace of new home sales declined 8.9% from September and was down 12% from the year before. The median sales price fell from the year before, and the supply of new houses on the market reached its highest level since February 2011, suggesting weakening demand.

The four-week moving average for initial unemployment claims rose for the third week in a row and the ninth time in 10 weeks after reaching its lowest level since December 1969. New jobless applications remained 37% below the 51-year average, according to Labor Department data, indicating an extended reluctance by employers to let go of their workers. The tight hiring market has been fueling consumer confidence, which emboldens the spending that drives economic growth.

Pending contracts for existing house sales dropped 2.6% in October, while year-to-year offers fell 6.7% for the 10th consecutive year-t0-year decline. In releasing the numbers, the National Association of Realtors blamed rising mortgage rates for dampening demand. The trade group lowered its forecast again for 2017 home sales, saying it expects to sell 5.34 million pre-owned houses in 2018. That would be 3.1% below final sales from 2017. It forecast sales to decline another 0.4% in 2019.

In an encouraging sign for holiday shopping, consumer spending rose 0.6% in October, the highest since March, according to the Bureau of Economic Analysis. Spending outpaced the 0.5% gain in income for the month resulting in the personal saving rate declining to 6.2% of disposable income, the lowest since last December. The latest monthly measure of the Fed’s preferred inflation gauge was 1.8%, down from 1.9% in August and September, suggesting inflation is not an imminent concern. 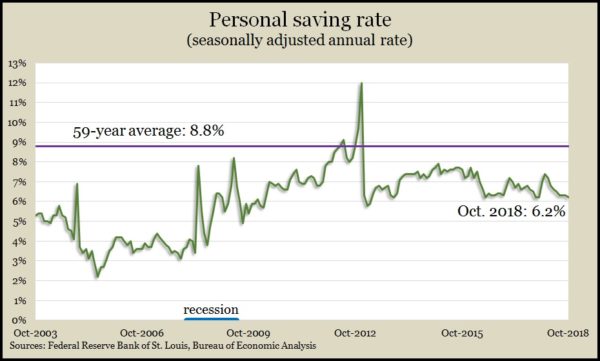