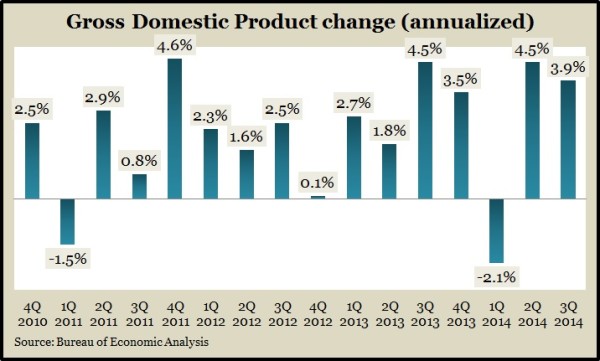 The housing recovery slowed with a 4.9% rise in house prices in the last 12 months, according to the S&P/Case-Shiller index. That’s the narrowest year-to-year comparison since October 2012. It has narrowed each month since peaking at 13.8% in November 2013. Eighteen of the 20 cities in the composite index had lower gains than in August. A housing economist for S&P said a number of indicators suggest the 2015 outlook for the industry “is stable to slightly better.”

The Conference Board reported that consumer confidence fell in November after hitting a seven-year high in October. Opinions on both current conditions and near-term expectations declined in November. The business research group said consumers’ feelings about prospects for jobs and earnings were relatively unchanged, though, suggesting some confidence heading into the holiday shopping season.

A volatile measure of manufacturing strength, durable goods orders, rose unexpectedly in October, mostly because of an increase in commercial aircraft orders. Commerce Department data showed orders for non-military capital goods excluding aircraft – an indicator of business investments – fell for the second month in a row, suggesting a growing reluctance by companies to expand.

Personal spending and income both rose 2% in October, both lower than analysts expected. Over the last 12 months, income outpaced spending 4.1% to 3.6%, according to the Bureau of Economic Analysis, suggesting consumers are holding back. The saving rate stayed at 5% of disposable income, and the Fed’s preferred measure of inflation increased just 1.4% from October 2013.

The annual sales pace of new houses rose less than anticipated in October but reached its highest level since May, according to the Commerce Department. The sales rate increased three months in a row, gaining 0.7% from September and 1.8% from October 2013.

Employers’ hesitation to let go of workers continued to be apparent from the moving four-week average for initial unemployment claims. Although the figure from the Labor Department rose for the third week in a row, it has remained below the 47-year average since the end of 2012.

Americans ended November less upbeat than analysts expected but more optimistic than any time since July 2007, according to the consumer sentiment index from the University of Michigan and Thomson Reuters. Led by consumer attitudes toward current conditions, sentiment rose to 88.8 on the index from 86.9 in October, although it was lower than a preliminary estimate of 89.4 a couple of weeks ago. The stronger showing suggested consumer spending may be rallying for the prime shopping season.