Declines in the output from mining and utilities pulled U.S. industrial production lower in October. The Federal Reserve reported that manufacturing, however, increased production for the second month in a row, a sign that American industries are not yet sinking in an economic slowdown that has engulfed much of the world. Capacity utilization remained relatively high but fell from its post-recession peak in September. Industries have enough wiggle room in their capacity levels that inflation is not an imminent threat.

The leading indicator of inflation on the wholesale level, the Producer Price Index, nudged up in October, despite analyst expectations of a decline. Energy prices fell for the fourth month in a row, according to the Bureau of Labor Statistics. The more telling 12-month rate dropped to 1.5%, the lowest since February. The report suggests that economic growth remain sluggish enough that the Federal Reserve should be in no hurry to raise interest rates.

The Commerce Department released building permit information for both September and October but said it still is behind on housing starts for those months. Permits grew to an annual pace of more than 1 million in October, the highest rate since June 2008. Multi-family units accounted for the bulk of the permits, but builders continued applying for more single-family houses too – a sign that the housing recovery is proceeding.

Inflation remained below the Federal Reserve’s sweet spot of 2% in October, according to the Consumer Price Index. The Bureau of Labor Statistics showed the broadest measure of inflation unchanged from September, thanks in large part to another dip in energy prices, including a 4% drop in the price of gasoline. The year-to-year rate was 1.7%, justifying the Fed’s reservations against raising interest rates. 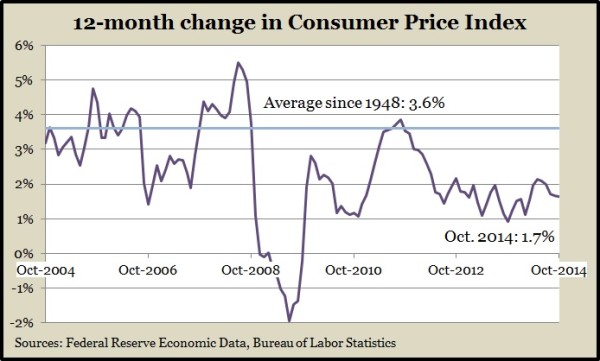 The annual sales rate of existing houses rose in October to its highest point in 13 months. The National Association of Realtors cited lower interest rates, greater inventory for the lift in sales but also noted that the portion of buyers who are first-time homeowners are at a three-decade low.

The moving four-week average for initial unemployment claims rose for the second week in a row after reaching the lowest level since April 2000. New applications for jobless benefits continue to be more than 20% below the 47-year average, according to the Labor Department. The lack of layoffs is a sign that employers are unwilling to let workers go amid the economic expansion.

The U.S. economy should continue a stronger growth spurt at least into 2015, according to the Conference Board’s index of leading economic indicators. Economists for the business research group said their index gained despite a sell-off in stocks in October as well as weakness in consumer goods orders and factory work schedules. Good, not great, consumer demand is in store for the next several months, the economists forecast.