Retail sales reached a record high for the fifth month in a row in October, although some categories fared better than others. The Commerce Department said total sales rose 0.3% from September, the narrowest of six consecutive increases since plunging from pandemic lockdowns in the spring. While all retailers were up 4.9% from their pre-pandemic sales, online sellers were up nearly 28% and bars and restaurants were down 15%. 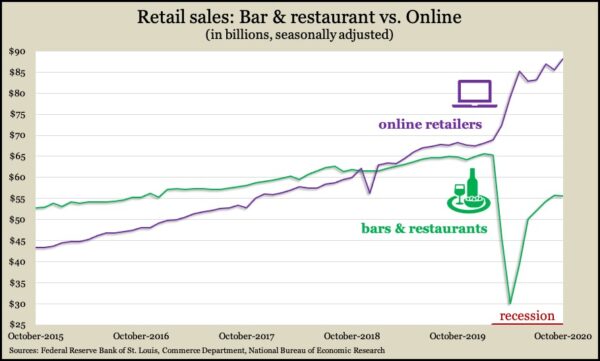 The Federal Reserve reported continued gains in industrial production in October, although output remained below levels before the pandemic. Production rose 1.1% from September, the fifth increase in six months, but it was still 5.6% behind where it was in February. Manufacturing output rose for the sixth month in a row with broad gains led by consumer goods. Industries’ capacity utilization rate, an early indicator of inflation, rose to 72.8%, up from an all-time low of 64.2% in April but down from 76.9% in February. The long-term average rate of 79.8% hasn’t been met since April of 2008.

The housing industry continued to be a bright spot in the economic recovery. The annual rate of housing starts rose within 2.4% of the pre-pandemic level and was up 63.8% from April, according to data from the Commerce Department. An even brighter sign was that starts of single-family houses, needed to boost low inventories in the housing market overall, rose to its highest level since April 2007. Similarly, building permits, an indicator of future housing construction, remained at their highest rate since before the financial crisis of the Great Recession.

The four-week moving average for initial unemployment claims declined to 742,000, continuing to recede from a record 5.7 million in April. The level remained above the 53-year record high before the pandemic and was well above the 50-year low of 208,000 in February. The volatile weekly number of new applications rose for the first time since October, possibly signaling an increase in joblessness resulting from a resurgence in COVID-19 cases.

The Conference Board reported that its index of leading economic indicators rose 0.7% in October, the same as September, after growing 1.6% in August. The business research group said recovery from initial fallout from the pandemic continued to slow, and it raised specific concerns about housing permits and consumers’ outlook. The group projected economic growth to moderate through the end of the year, especially because of another wave of COVID-19 cases and persistent unemployment.

With mortgage rates at record lows, existing home sales rose to an annual rate of 6.85 million in October, up 4.3% from the pace in September and 26.6% higher than in October 2019. The National Association of Realtors said inventories of houses for sale sank to 2.5 months’ worth at the current sales rate, the thinnest supply ever measured by the trade group. More than 70% of the houses sold in October were on the market for less than a month. The median sales price jumped 16% from its year-ago level.