The Commerce Department said wholesalers increased inventories in September at a slightly greater rate than their sales. The tell-tale inventories-to-sales ratio, though, remained steady, indicating companies are a little less lean than they were a few months ago. Inventory build-ups are good for economic growth, but when sales are gaining faster than supplies, greater employment and production tend to follow.

The moving four-week average for initial unemployment claims rose for the time in nine weeks, up from the lowest level in 14 years. Jobless applications filed with the Labor Department have remained below the 47-year average every week since the beginning of 2013, a sign that employers generally don’t want to let workers go.

U.S. job openings dipped in September from a 13-year high, but new hires rose to the highest level since the Great Recession began nearly seven years ago. The Bureau of Labor Statistics reported that the number of workers voluntarily quitting their jobs reached the highest point since April 2008, an indicator that workers are more confident in their chances of landing better positions. 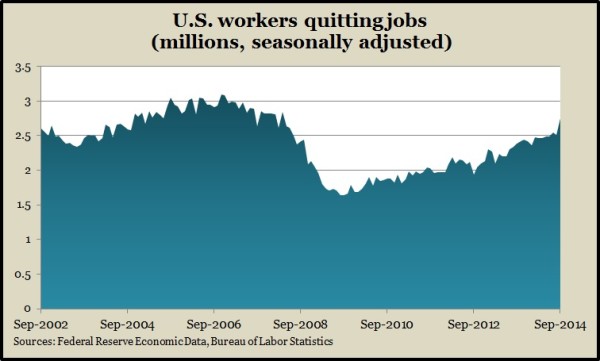 With the money they’re saving from falling gasoline prices, Americans appear to be shopping elsewhere. The Commerce Department reported that all but two retail sales categories rose in October. Gas sales were down with prices reaching their lowest mark in nearly four years. Electronics sales also declined after a boost from Apple’s latest iPhone launch in September. Consumer spending accounts for about 70% of U.S. economic growth.

A preliminary read of consumer sentiment from the University of Michigan and Thomson Reuters suggests the highest confidence in current conditions since before the Great Recession. Expectations for six months out also rose to their highest point since 2007, an encouraging sign for holiday spending.