Recovery in the labor market showed limited progress in September, remaining well below levels of job openings posted before the pandemic. The Bureau of Labor Statistics said employers had 6.4 million openings, up 1.3% from August but down 8.1% from February. Demand for workers was up 28.8% from its low point in April and down 14.4% from the peak reached in January 2019. A separate report earlier showed 12.1 million people seeking jobs in September. Although not all the unemployed workers would necessarily qualify for the 6.4 million openings, it illustrates a dramatic turnaround from before the pandemic, when openings outnumbered the unemployed. 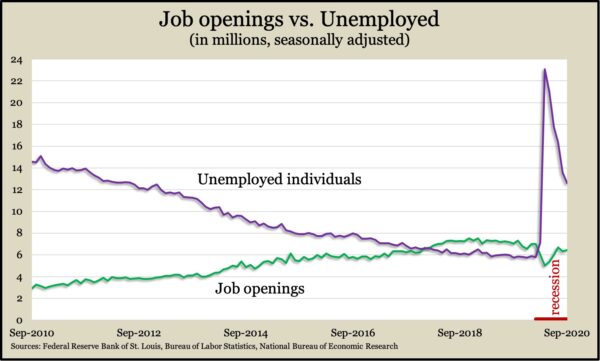 The broadest measure of inflation showed prices unchanged in October following four months of recovering from widespread pandemic lockdowns in the spring. The Consumer Price Index showed price decreases in such items as apparel and home furnishings offsetting increased prices for items including food away from home and groceries. Year-to-year, the Bureau of Labor Statistics reported that broad inflation grew 1.2%, with food costs rising 3.9% and energy prices down 9.2%, including an 18% drop in the cost of gasoline. Excluding the volatile categories of energy and food, the core CPI rose 1.6% from October 2019, down from a 1.7% 12-month rate in September and 2.4% in February.

The four-week moving average for initial unemployment claims continued to decline, falling by the largest margin in more than two months. Data from the Labor Department showed the four-week average remained more than double its 53-year average and more than triple the 50-year low it hit in February. More than 21 million Americans were claiming jobless benefits, up from 1.4 million the year before, with weekly increases for pandemic-related relief programs.

Inflation on the wholesale level rose 0.3% in October, the sixth consecutive increase, according to the Bureau of Labor Statistics. Gains came mostly from a 2.4% rise in food costs and a 0.8% increase in energy costs. Excluding prices for food, energy and trade services, the core Producer Price Index rose 0.2%. Compared to the year before, the PPI rose 0.5%, the most since a 1.1% year-to-year gain in February. The core index was up 0.8% from the year before, the biggest gain since 1% in March.

The University of Michigan said consumer sentiment declined from the end of October as expectations fell. Republicans soured on election results, and Democrats worried more about the COVID-19 caseload, according to preliminary survey data. Overall, consumers had their lowest opinion of the economy and their personal prospects since August. Their assessment of current conditions stayed about the same as in October.