The housing recovery is continuing, according to the March update of the S&P/Case Shiller Home Price Index. The 5% year-to-year increase in prices for the 20-city composite held steady from February and marked the 35 month in a row of gains. That’s better than analysts had expected. The index shows home prices nationwide, adjusted for inflation, are outpacing growth in per capita income and wages. An economist with Standard & Poor’s said price moderation is due but that housing is in a rebound, not a bubble.

Consumer confidence also rebounded more than expected in May, according to the Conference Board. Consumers felt better about current conditions for the first time in three months while expectations declined a bit. The business research group sees continued caution toward the near future.

A measure of manufacturing prospects, durable goods orders, declined in April, led by a drop in requests for commercial aircraft. Excluding orders for transportation equipment – a heavy, but volatile factor – bids for manufacturing rose more than analysts expected, according to the Commerce Department report. A key measure of business investments also rose and was revised upward for March, suggesting hope for a sector hampered by weak global demand and a strong dollar.

Another sign of housing’s rebound was a faster pace of new home sales in April after a dip in March. Commerce Department data showed an annual sales rate of 517,000 residences in April, which was second to February as the highest pace since before the 2008 financial collapse. The supply of houses for sale shrank in relation to demand. 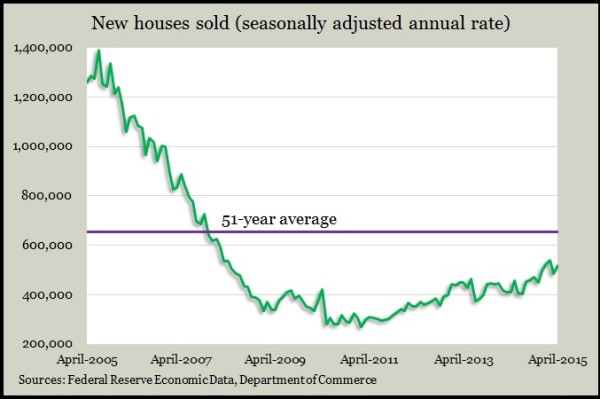 The moving four-week average for initial unemployment claims rose for the first time in five weeks following the lowest level in more than 15 years. According to Labor Department data, the level remained well under the 48-year average, suggesting persistent reluctance by employers to let workers go.

Citing improving demand despite rising interest rates, the National Association of Realtors reported that its pending home sales index rose in April to the highest level in nine years. The trade group repeated concerns that lack of supply is pushing up prices, which could put a drag on sales. Pending sales are up 14% from April 2014 while actual sales of existing houses gained 6% in the same period.

The economy shrank at an annual rate of 0.7% in the first quarter, reversing from a 2.2% gain in the fourth quarter, the Bureau of Economic Analysis said. The decline in Gross Domestic Product reflected a surge in the U.S. trade deficit as imports rose more than initially estimated, in part because of an influx of goods after West Coast port strikes were settled. Consumer spending – which drives about two-thirds of business activity – increased at an annual rate of 1.8%, slightly lower than previously estimated and below the 3% long-term average. Consumers continue to hold back on spending despite lower gas prices. The saving rate rose to 5.5% of disposable income from 4.7% at the end of 2014.

Consumer spending should return to the 3% rate yet this year, based on the May consumer sentiment index from the University of Michigan. Although consumers gave lower marks for both current conditions and expectations, their average sentiment so far this year is the highest since 2004, an economist with the survey said. The index reading dropped to 90.7 in May from 95.9 in April but had improved from a mid-month estimate.