The annual sales rate of new houses declined 17% in April, the fourth drop in a row, reaching the slowest rate since the beginning of the pandemic. The Commerce Department said the median price rose 20% from April 2021 to a record $450,600. Meantime, the number of new houses for sale rose to the highest point in 12 years. Houses priced $500,000 and more made up 43% of all sales in April, compared with 26% the year before and 18% for all of 2020.

The Commerce Department said durable goods orders rose 0.4% in April, the sixth gain in seven months, led by an increase in aircraft orders. Excluding the volatile transportation sector, orders rose 0.3% from March. Year-to-year demand for long-lasting manufactured items was up 10.5%, or 8.6% without transportation equipment. A proxy for business investments rose 0.7% from March and was up 14.1% from April 2021.

The four-week moving average for initial unemployment insurance claims rose for the seventh week in a row after hitting an all-time low in early April. Labor Department data showed the moving average was the highest since mid-February but still 44% below the 55-year average. A little more than 1.3 million Americans received jobless benefits in the latest week, down 4% from the week before and down from 15.8 million the year before.

The U.S. economy slowed more than initially estimated in the first quarter, dipping at an annual rate of 1.5%, the Bureau of Economic Analysis reported. At first, the agency thought gross domestic product had fallen off at a 1.4% pace, but spending on inventories and housing declined more than earlier data suggested. A faster rate of consumer spending couldn’t cover the gap. The inflation-adjusted level of GDP rose 3.5% from the first quarter of 2021 and was 2.8% above the pre-pandemic peak. Personal saving declined 29% from the fourth quarter, and the personal saving rate dropped to 5.6% of disposable income from 7.9% at the end of 2021. 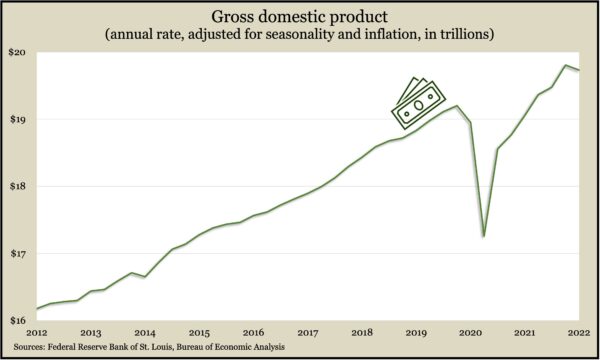 Rising mortgage rates on top of inflated prices have been crimping demand for houses as the pending home sales index declined in April for the six month in a row. The National Association of Realtors said its index fell 3.9% from March and was down 9% from the year before, for the 11th consecutive year-to-year decline. The trade association said higher borrowing costs have added 25% to the expense of buying a house in the last year. It expects sales to decline by 9% in 2022, resulting in home price increases slowing to 5% a year, as opposed to about 15% now.

The Bureau of Economic Analysis showed consumer spending continued to rise in April, the fourth consecutive month of gains despite concerns about inflation. Spending rose 0.9% from March, more than twice the gain in income, meaning personal saving declined. Consumer savings dropped to 4.4% of disposable income, the lowest in 14 years. In the same report, the Federal Reserve’s main gauge of inflation slowed for the first time since November 2020. The personal consumption expenditure index was up 6.3% from April 2021, down from 6.6% in March, which was the highest since 1982. 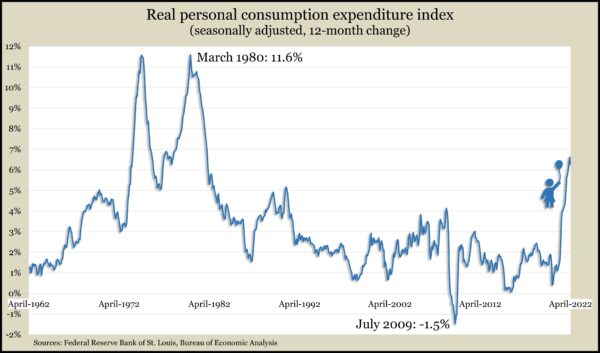 A precursor to spending, consumer sentiment, declined further in May, driven by concerns about inflation. The University of Michigan said inflation worries were dampening confidence about buying houses and durable goods and also souring optimism toward the economy overall. At the same time, consumers’ feelings toward their personal finances stayed stable. Less than a quarter expected to be worse off financially in the next year, while a majority anticipated being better off within five years.