In another sign that housing may have bottomed out – if not started a comeback, the National Association of Realtors reported a 3.4% rise in existing-home sales in April. A 21% drop in inventory from the same time last year helped prices rise, marking the first back-to-back 12-month price gains since the summer of 2010. Other data from the trade group suggested the fewer sales involved investors buying foreclosed properties with greater participation from first-time buyers.

The annual sales rate of new houses also rose in April, as supplies fell to their lowest level of the economic recovery. The median price advanced 4.9% from the year before, posting the third year-to-year gain in a row, according to the Census Bureau and Department of Housing and Urban Development.  Also, revisions of past data indicated that the double-dip housing recession hasn’t been as severe as previously reported. 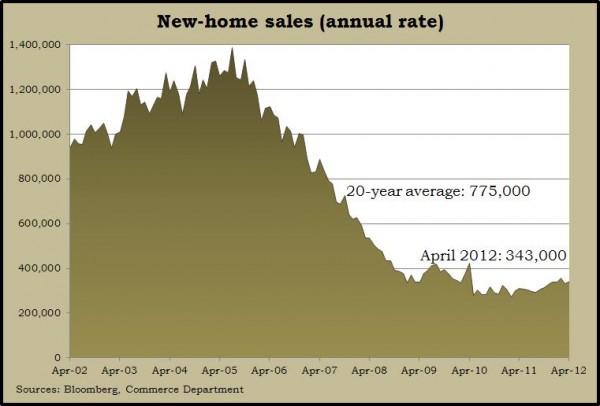 The Commerce Department reported lower-than-expected durable goods orders for April, a sign of an anticipated manufacturing slowdown. Orders of non-military capital goods, excluding aircraft – a gauge of business investment – fell for the second month in a row, which hasn’t happened since early 2011. Manufacturing has been leading the U.S. economy out of the Great Recession, but the pace of global growth has been easing off.

The moving four-week average for initial unemployment claims dropped for the third week in a row, suggesting continued gradual progress for the beleaguered labor market. Labor Department data showed jobless claims down 15% from the year before, the widest such gap since August. New claims have been below 400,000 a week for 29 weeks in a row.

Consumer sentiment rose in May more than analysts had expected, given recent stock selloffs, renewed concerns over European debt and slower job growth. The University of Michigan and Thomson Reuters reported that record numbers of consumers cited improving employment conditions and few even mentioned troubles in Europe. Optimism reached its highest level since before the recession, especially in terms of consumers’ feelings toward their current situations.