The choppy recovery in U.S. housing surged in April with housing starts reaching the highest rate since before the recession. The Commerce Department said builders began construction of 1.13 million residences, on an annual rate, the most since November 2007. Multi-family units continued growing at a faster pace than single-family houses. Likewise, building permits for future construction rose at the highest level in more than seven years. Still, the pace of housing remained about half the recent peak in 2006. 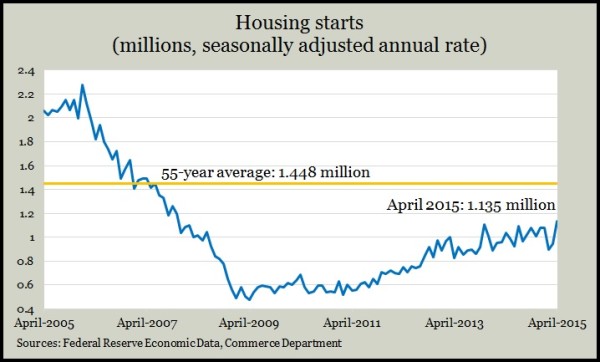 The annual sales rate of existing homes suffered a setback in April, according to the National Association of Realtors. Realtors sold at a 3% lower pace than March, although it was 6% ahead of the year-ago pace. An economist for the trade group said not enough houses are on the market to keep up with demand. That mismatch has fueled price increases, with the median sales price rising 8.9% from April 2014, the 38th consecutive year-to-year increase.

The growth in building permits in April contributed to a larger-than expected gain in the leading economic indicators, according to the Conference Board. The business research group said its April index suggests only a temporarily slow start for the economy this year. The group saw no signs of significant economic strengthening in the coming months.

The moving four-week average for initial unemployment claims dropped for the fourth week in a row, reaching its lowest point since April 2000 and maintaining a level below the 48-year average. The latest data from the Labor Department report suggested ongoing reluctance among employers to let their workers go.

Inflation stayed below the 2% target of the Federal Reserve Board in April, based on the monthly Consumer Price Index. The broadest measure of inflation, from the Bureau of Labor Statistics, showed core prices up 1.8% from April 2014. If the volatile categories of food and energy are included, the cost of living actually sank a bit. The month-to-month trend suggested moderate economic growth with overall prices gaining for the third month in a row and the core index scoring its highest monthly increase since last May.