A key measure of consumer spending – retail sales – barely rose in April after sagging in March. The Commerce Department reported that 11 of 13 categories had higher sales in April, led by building supply stores and garden centers. Declines were mostly at gas stations, where prices fell. Year-to-year retail sales grew by 3.7%, below the 20-year average rate of 4.5%.

Business inventories stayed flat, but sales fell, according to a separate Commerce Department report. With supply outpacing demand, the inventories-to-sales ratio decreased, indicating that businesses would be less inclined to ramp up production or boost hiring until after sales trends improve.

Inflation on the wholesale level grew at its slowest pace in three years in March, led by another drop in energy costs. The Bureau of Labor Statistics said the core Producer Price Index – excluding food and fuel – showed the smallest growth since November, reflecting slackened demand from an anemic economy. The year-to-year core rate was 1.7%, the same as in February and January, suggesting no immediate threat of inflation.

The Federal Reserve reported lower-than-expected industrial production and capacity utilization in April. Hampered by a dip in manufacturing and a slackening use of utilities, industrial production dropped for the first time in three months. Both indicators suggest economic growth remains subdued, giving little reason for Fed policy makers to cut back on monetary stimulus.

The moving four-week average for initial unemployment claims rose for the first time in four weeks, up only slightly from the lowest level in five years. Labor Department data showed jobless claims down 10% from the year before and 49% below the recession peak set in April 2009. Current levels show continued employer reluctance to let go of their workers.

Offering further evidence that inflation is at bay, the Bureau of Labor Statistics said the Consumer Price Index fell for the second month in a row, largely because of falling gas prices. Year-to-year, the broadest-based measure of inflation rose 1.1%. That’s the slowest rate since November 2010 and safely below the Fed’s 2% target. The 30-year average is 2.9%. 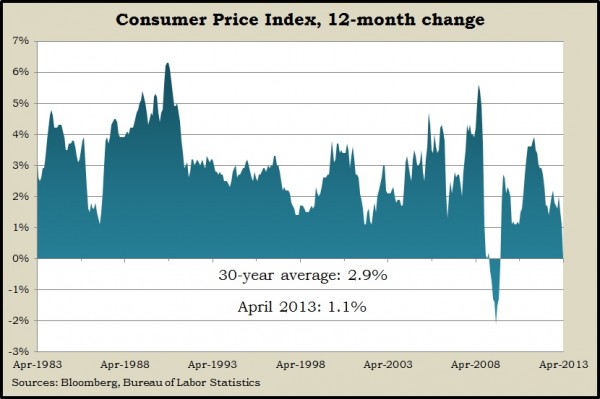 The gradual housing recovery lost steam in April with housing starts falling more than forecast. The annual pace of new residential construction dropped 16.5% from March but was up 13.10% from April 2012, according to a joint report from Commerce and the Department of Housing and Urban Development. On a more encouraging note, building permits – a leading indicator of housing starts – rose to the fastest pace since June 2008.