American employers had barely 5 million job openings in March, down 2.9% from February, the first dip since December. The openings represented a gain of 18.6% from March 2014, according to data from the Bureau of Labor Statistics. Compared to the number of unemployed workers, the rate of openings nudged up to 1.72 per job seeker, 1.69 in February and 2.47 in March 2014. The number of workers quitting jobs rose to the highest point since April 2008, suggesting employees are gaining confidence in their ability to get new jobs. 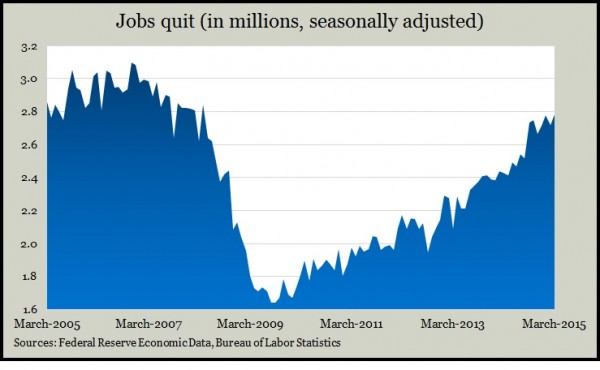 A key measure of consumer spending – retail sales – was unchanged in April after rebounding in March from a setback in February. The Commerce Department reported that only six of 13 categories had higher sales in April. Excluding volatile automotive and gasoline sales, retailers gained less than analysts expected. Year-to-year, retail sales fell grew by 0.9%, the lowest 12-month gain since late 2009, and a fraction of the long-term average of 4.5%.

Business inventories rose 0.1% in March, lagging a 0.4% increase in sales, according to a separate Commerce Department report. As a result, the inventories-to-sales ratio declined for the first time in nine months, though it still remains near levels last reached in the recession. The ratio indicates how businesses are keeping up with customer demand and whether they risk getting stuck with oversupplies.

Inflation on the wholesale level declined 1.3% year-to-year in April for the third month in a row and at a wider pace. The Bureau of Labor Statistics said that even excluding volatile food and fuel costs, the Producer Price Index fell from March, for the second time in three months. Lack of inflation is one sign of economic weakness that has allowed the Federal Reserve to continue keeping interest rates at record lows.

The moving four-week average for initial unemployment claims fell for the third week in a row, reaching the lowest level in more than 15 years. Labor Department data showed jobless claims persistently below the long-term average, suggesting continued employer reluctance to let go of their workers.