The annual rate of existing home sales sank 6.6% to 6.2 million in February, the first setback in three months. Sales continued to track higher than year-ago rates, but the National Association of Realtors cautioned that rising mortgage rates and housing prices are cutting into affordability, threatening to further slow the pace. The median price in February was $313,000, up 15.8% from the year before, marking the 108th consecutive month of year-to-year increases. Inventories remained at record lows of 1 million houses, a two-month supply at current sales rates.

The Commerce Department and Department of Housing and Urban Development said the annual rate of new home sales slowed 18.2% in January, although it was up 8.2% from the year before and was roughly on par with levels 14 years ago. The median price for new houses rose 5.3% from the year before, a function of steady demand and low supply. The report showed the number of new houses for sale was down 4.6% from February 2020. New houses were selling at their quickest pace in any February on record, going back to 1975. 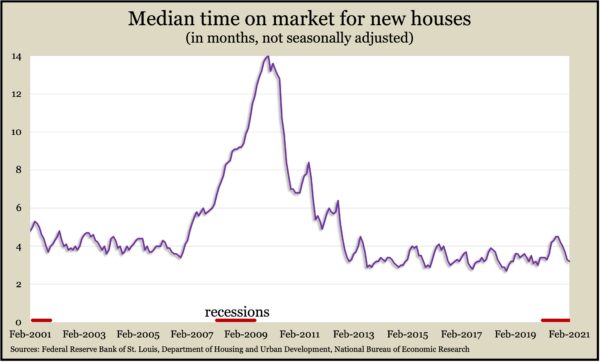 Durable goods orders fell in February for the first time in 10 months, declining 1.1% following a 3.5% gain in January. Automotive orders led a broad setback in February, although activity for commercial airlines manufacturers continued to turn around. In the latest 12 months, total orders rose 3.5%. Excluding transportation equipment, orders increased 7% from the year before. A proxy measure for business investment fell for the first time in nine months but was up 8.5% from February 2020.

The U.S. economy rose at a faster pace at the end of 2020 than previously detected, according to the final fourth quarter estimate of the gross domestic product. The Bureau of Economic Analysis said the quarter grew at an annual rate of 4.3%, up from the previous estimate of 4.1%. Measured year to year, the economy shrank 2.4% from the fourth quarter of 2019, the lowest level of output since mid-2018. The Federal Reserve’s favorite measure of inflation showed a 1.2% increase since the end of 2019, remaining below the 2% target. 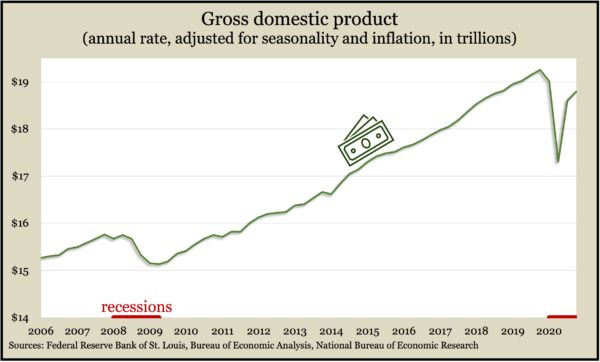 The four-week moving average for initial unemployment claims fell for the seventh week in a row to its lowest mark in 52 weeks. Still, the average of 736,000 new claims was more than triple the average one year before, according to Labor Department data. Nearly 19 million Americans were receiving unemployment benefits in the latest week, up 4% from the week before and almost 10 times the number a year ago.

By far the biggest driver of the U.S. economy, consumer spending declined in February as incomes fell following the January benefit of federal relief payments. The Bureau of Economic Analysis reported that personal consumption fell 1% while personal income declined 7.1%. In January, spending rose 3.4% on a 10.1% gain in income. Adjusting for inflation, consumer spending was still 2.1% below its year-ago level. The personal saving rate dropped to 13.6% of disposable income from 19.8% in January. The Fed’s favorite inflation gauge was 1.4%. 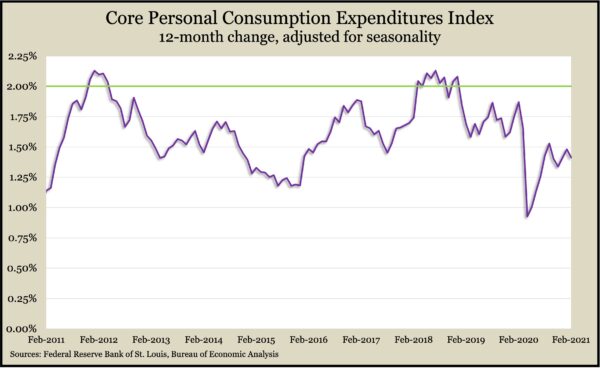 The University of Michigan’s consumer sentiment index rose in March to its highest level in a year in reaction to better-than-expected vaccination counts and the latest round of federal pandemic payments to households. The reading of 84.9 was up from 76.8 in February but still behind the 89.1 mark set in March 2020. An economist with the survey said data pointed to robust increases in consumer spending.He added that the strength and duration of consumption depends on how fast households draw down their savings.