A chief indicator of consumer spending, retail sales, rose 1.1% in February, the biggest gain in five months. The Commerce Department reported that car sales and higher gasoline prices helped drive up what consumers spent, but most categories gained. Year-to-year sales of 6.5% remained well above the long-term average, suggesting continued confidence in the economy.

Businesses stocked shelves at a faster rate than analysts expected in January. In fact, it was the highest rate since May 2011. Commerce said in a separate report that continued car-buying accelerated buildup of business inventories, which could signal an anticipation of rising consumer demand. Retail inventories excluding the volatile motor vehicles category grew the most since 1995.

Higher gasoline prices also had an effect on inflation on the wholesale level in February. The Producer Price Index rose at its fastest clip since September, according to the Bureau of Labor Statistics, led by energy costs and a 7.2% increase in gas prices. But food prices declined slightly, and the core rate – factoring out volatile fuel and food costs – had its smallest year-to-year since January 2011, indicating continued low pressure on inflation.

The moving four-week average for initial unemployment claims remained at a five-year low level, reflecting an extended trend away from laying off workers. Gradually, that is resulting in more jobs added as a slowly growing economy nudges reluctant employers toward hiring more workers.

U.S. industrial production and utilization expanded more than analysts had forecast in February. The Federal Reserve reported that more seasonal weather raised the output of utilities while manufacturing of motor vehicles, business equipment and construction supplies helped push overall production to the highest point in three months. The percentage of production capacity in use rose to a five-year high. 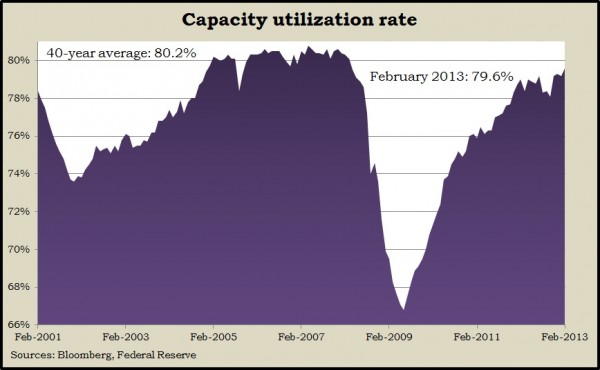 Higher gasoline prices pushed the broadest measure of inflation, the Consumer Price Index, to its biggest gain of the recovery in February. The Bureau of Labor Statistics said the less-volatile year-to-year rate rose 2%, which matched the 12-month core rate that excludes energy and food prices. The Federal Reserve has pegged 2% as the target inflation rate in its long effort to revive economic growth via low interest rates. That’s about half the historical rate of inflation.