The manufacturing sector contracted at a slower pace in May as more non-essential factories began reopening, according to the Institute for Supply Management. The ISM Manufacturing Index rebounded slightly from an 11-year low in April with new orders overall. Export orders especially recovered a little bit of the ground they lost as most operations halted from the COVID-19 pandemic. The trade group said surveys with purchase managers suggested May was a transition month for manufacturing, but demand and supply chains remained uncertain.

Construction spending declined in April for the first time in 10 months, the Commerce Department reported. A 2.9% drop in the annual rate of spending followed nearly $1.39 trillion in expenditures in March, the highest rate in 27 years of data. Residential spending, which covers about 40% of all construction dollars, was down 4.5% from March. Most categories declined as April was the first full month for pandemic lockdowns to take effect.

The U.S. service sector showed signs of rebounding in May as the ISM index of non-manufacturing activity contracted at a slower rate than in April. The index posted its first back-to-back contractions since 2009. following 122 consecutive months of expansion. Of 18 industries surveyed, four reported growth in May, up from just two in April.

The Commerce Department said manufacturing demand declined further in April with factory orders down 13%, following an 11% drop in March. The setback was widespread and was led by transportation equipment, which included a 53.4% decline in orders for motor vehicles and parts. Unadjusted for inflation, factory orders are at their lowest level since December 2009.

The four-week moving average for initial unemployment claims continued receding from historic highs but at 2.3 million applications remained more than triple the average dating back to 1967. More than 42 million Americans filed new claims for benefits since mid-March, according to Labor Department data, amounting to 27% of the 156 million people in the U.S. labor force.

Worker output and hours both decreased in the first quarter at the steepest pace since early 2009, the Bureau of Labor Statistics said. As a result, worker productivity declined at an annual rate of 0.9%, revised from a previously estimated drop of 2.5%. For the quarter, output fell at an annual rate of 6.5%, with hours worked down 5.6%. The statistical period includes only the first couple of weeks of the COVID-19 shutdowns in the U.S. Compared to the year before, productivity rose 0.7%, vs. an average annual increase of 2.2% since 1948.

The U.S. trade deficit widened more than expected in April, amid disruptions in global supply chains and demand sparked by the pandemic. The Commerce Department said the trade gap grew by 16.7% to $49.4 billion, with exports declining 20.5% and imports off by 13.7%. With a narrower difference between exports and imports in March, the U.S. economy sank at a 5% annual pace. A larger trade gap will contribute to even greater decline in gross domestic product expected in the second quarter.

The free fall in employment losses from the pandemic seemed to have bottomed out in April as employers unexpectedly added jobs in May. The Bureau of Labor Statistics said the country had a net gain of 2.5 million jobs after losing 22.1 million in March and April. That put the job level back where it was at the end of 2011. The unemployment rate declined to 13.3% from 14.7% in April, the highest on data going back to 1948. May’s unemployment still was the second highest on record, but analysts had forecast the rate to reach 20%. In February, the rate hit a 50-year low of 3.5%. 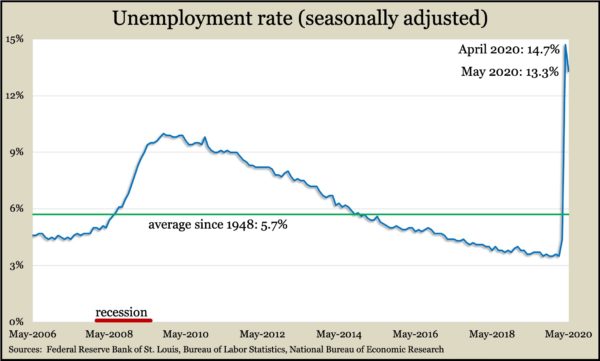