The manufacturing sector expanded in May at a faster pace amid executives’ ongoing concerns about keeping up with demand. The Institute for Supply Management said its manufacturing index rose to 61.2 from a reading of 60.7 in April, the 12th month in a row the gauge exceeded 50, suggesting the industry was growing. Supply managers surveyed reported continued challenges hiring and keeping the workers they needed as well as shortages of base materials, higher prices for commodities and transportation bottlenecks. The trade group said its index indicates the U.S. economy is growing at an annual pace of 5.2%.

Housing led a 0.2% increase in construction spending in April, reaching  a record annual rate of more than $1.5 trillion. The Commerce Department reported residential spending rose 1% from the March pace and was up 29.5% from April 2020. Spending on residential construction was above the pre-pandemic peak for the ninth month in a row. Public expenditures on construction were down month-to-month as well as year-to-year.

The four-week moving average for initial unemployment claims declined for the eighth week in a row and the 16th time in 17 weeks. A Labor Department report showed first-time applications about one-fifth the level they reached the year before but still 15% above the 54-year average. More than 15 million Americans claimed unemployment compensation in the latest week, about three-fourths of them through relief programs tied to the pandemic.

The service sector of the U.S. economy expanded in May for the 12th month in a row and at the fastest pace on record. The Institute for Supply Management said its service index showed continued expansion for the biggest portion of the economy but with growing pains that include slower deliveries and higher prices. Supply managers surveyed by the trade group reported ongoing challenges with logistics and labor as they worked to meet customers’ demands.

U.S. employers added 559,000 jobs in May, recovering nearly 14.7 million jobs from record declines last spring. They remained 7.6 million jobs (5%) shy of the pre-pandemic peak in February 2020. According to payroll data from the Bureau of Labor Statistics, the leisure and hospitality field accounted for more than half of the employment gains, and nearly two-thirds of those were at bars and restaurants. Leisure and hospitality jobs remained 15% below the pre-pandemic level. The bureau’s household survey showed the unemployment rate declining to 5.8% from 6.1% in April, but that was down from a record 14.8% in April 2020. In February 2020, the rate was 3.5%, the lowest in more than 50 years. 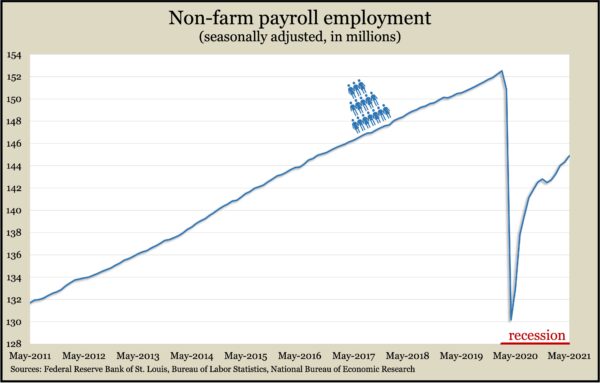 A dip in orders for automotive vehicles and parts led the first decline in 12 months in factory orders in April. Orders were down 0.6% from March, with automotive demand falling 1.8% as automakers contended with an ongoing global shortage of semiconductor chips. Excluding volatile transportation equipment orders, the Commerce Department reported, factory orders rose 0.5% in April. Compared to the year before, total orders were up 14.2% and remained above the pre-pandemic level for the fifth month in a row.