New home sales fell 7.8% in May to 626,000 houses, the Commerce Department reported. That annualized sales rate was a 3.7% decrease from May 2018, suggesting continued slowing in the housing market despite lower mortgage rates. The inventory of new houses for sale rose for the second month in a row, and the median sales price declined from the same time last year, signs that demand may be weakening.

Another indication that the housing recovery may have peaked came from the S&P CoreLogic Case-Shiller home price index, which showed year-to-year price gains continuing to narrow. Prices in the 20-city index rose 2.5% in April, a seven-year low. It was down from the March gap of 2.6% and marked the latest in a gradual decline from 6.7% a year ago. 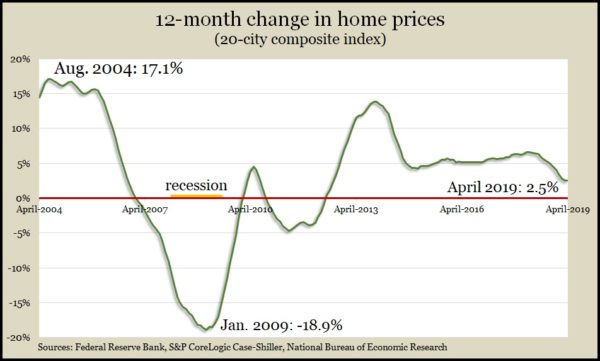 The Conference Board said consumer confidence dipped to its lowest level since 2017 in June. The business research group blamed trade tensions for riling uncertainty and lowering consumers’ outlooks as well as their assessments of current conditions. Although confidence overall is relatively high, the group cautioned that ongoing uncertainty could cut into consumer spending, which drives about 70% of the economy.

Consumer spending slowed in the first quarter, even as gross domestic product grew at 3.1%, the fastest start to a year since 2015. The Bureau of Economic Analysis reported that consumer spending rose at a 0.9% annual pace, down from 2.5% in the fourth quarter. Compared to earlier estimates, net exports, business investments and government spending contributed more to the first-quarter growth. Housing investments fell for the fifth quarter in a row. The Federal Reserve Board’s favorite measure of inflation came in at 1.2%, below the target of 2%.

Citing lower mortgage rates and higher consumer confidence, the National Association of Realtors said its pending home sales index rose 1.1% in May. Even so, the index suffered its 17th consecutive year-to-year decline. An economist for the trade group cautioned that builders weren’t creating new houses fast enough, adding to concerns of low inventories.

The four-week moving average for initial unemployment claims rose for the third week in a row, though it still hovered around 50-year lows. According to data from the Labor Department, jobless applications have been below the 52-year average every week since early 2013, indicating that employers are cautious about letting workers go. The tight labor market should encourage more consumer spending.

The Bureau of Economic Analysis said personal spending rose 0.4% in May and that April’s gain was 0.6%, twice the rate previously estimated. Together, the figures suggested a revival of consumer involvement following a weak showing in the first quarter. Personal income rose o.5% in May, holding the personal saving rate at 6.1% of disposable income. In the same report, the Federal Reserve’s preferred inflation gauge showed a 1.6% annualized increase, above the first-quarter pace but still below the 2% target.

The University of Michigan consumer sentiment index beat analyst expectations but declined slightly from its recent high in May. A Michigan economist who oversees the survey said consumers particularly in the upper third of household incomes expressed misgivings about the effects of trade tensions on U.S. economic prospects. He said the index suggests a 2.5% increase in consumer spending over the next year.