U.S. housing growth continued slowing in May, based on housing starts and building permits. A joint release from the Commerce Department and the Department of Housing and Urban Development showed May starts on an annual pace of 1.27 million houses, down 0.9% from the April rate and down 4.7% from May 2018. Building permits, which reflect plans for future construction, rose 0.3% from the annual rate in April to 1.29 million but were down 0.5% from the year before. Completions of single-family houses, which add needed inventory to the housing market, reached an annual rate of 890,000 in May. That was 11.5% below the historical average and less than half the peak set in March 2006. 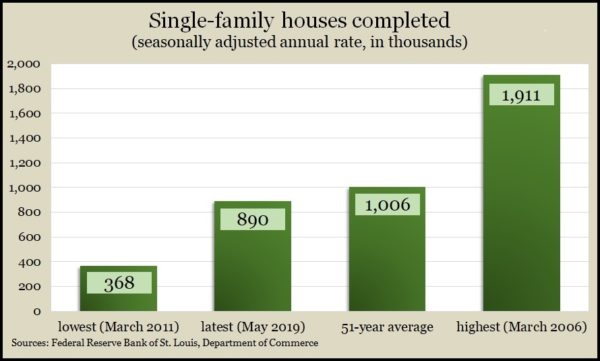 The policy-making body of the Federal Reserve Board decided to stand pat on short-term interest rates. The Federal Open Market Committee cited increased uncertainties about its outlook on the economy and said that it will keep an eye on international developments, among other signs of sustainable economic growth. Through December, the Fed had been ratcheting up interest rates for three years to get them closer to historical averages. So far in 2019, policy makers have backed off on plans to continue raising rates and have even suggested possible reductions if they detect enough economic weakness.

The four-week moving average for initial unemployment claims rose for the second week in a row. Jobless applications were 38% below the 52-year average, according to Labor Department data, suggesting that employers continue to be reluctant to let workers go. That persistent indication of a tight labor market has been lifting consumer confidence, which is important because consumer spending accounts for about two-thirds of U.S. economic activity.

The index of leading economic indicators was unchanged in May after rising 0.1% in April and 0.2% in March. Boosts occurred from financial conditions and consumer expectations, which helped offset May’s stock market declines and weaker manufacturing numbers. The Conference Board said the index showed moderating economic growth, which could be headed to a 2% pace by year-end.

Sales of existing houses grew 2.5% in May to an annual pace of 5.34 million, according to the National Association of Realtors. The seasonally adjusted rate was 1.1% shy of the May 2018 pace of 5.4 million houses. An economist for the trade group cited the tick up in sales as evidence of continued demand amid lower mortgage rates. He also said more construction is needed to support inventory, which is near historical lows, resulting in higher prices. The median price rose 4.8% from the year before, the 87th consecutive year-to-year gain.