Amid partial, gradual reopening of U.S. commerce, retail sales rose a record 17.7% in May. The Commerce Department reported rebounding revenue for each of 13 retail categories, led by a 188% increase in sales at clothing stores and an 89.7% rise for home furnishings. Seasonally adjusted sales levels were still $44.1 billion lower than their peak in January after three straight months of decline. Sales at restaurants and bars—a key indicator in an economy driven 70% by consumer spending—rose by 29.1% from April, which marked their lowest level since 2003. Tabs from dining out still were the lowest in more than a decade. 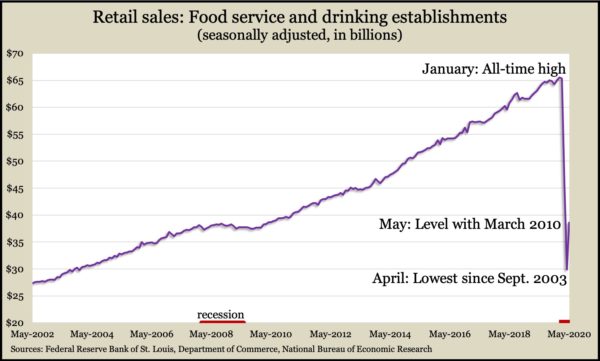 U.S. industrial output hinted at a recovery in May, rising 1.4% from its output in April, the Federal Reserve reported. Still, overall production was down 15.4% from where it was in February, before the COVID-19 pandemic disrupted global supply chains and devastated demand. Manufacturing output rose 3.8% from April with broad gains led by auto makers, but compared to before the pandemic, factory production was down nearly 17%; automotive was off by more than 60%. Factories, mines and utilities operated at 64.8% of their capacity in May, up from 64% in April but still below the 48-year average of 79.8% and even short of the Great Recession low of 66.7%.

The U.S. housing industry picked up in May with both housing starts and building permits rising from months of setbacks related to the COVID-19 pandemic. The annual rate of housing starts increased 4.3% to 974,000 residences, which was still 23.2% below the May 2019 pace. Permits for future housing rose 14.4% to a 1.2-million building pace, which was down 8.8% from the year before. The start rate of single-family houses was down 35.5% from its post-recession peak in December. Single-family completions declined for the third month in a row to the lowest level since the end of 2018.

The four-week moving average for initial unemployment claims ducked below 2 million for the first time in 12 weeks, continuing its decline from 5.8 million in mid-April. Prior to the pandemic, the record height was 674,000 in 1982. The Labor Department said 29.2 million Americans were receiving jobless benefits in the week that ended June 13.

The gradual decline in unemployment applications accounted for about two-thirds of the 2.8% May gain in the index of leading economic indicators, according to the Conference Board. The business research organization also credited improvements in housing permits and stock prices but said factory orders and consumer expectations kept the index from rising more. May’s increase followed index declines of 6.1% in April and 7.5% in March. The Conference Board said the breadth and depth of the economy’s drop-off mean it “will remain in recession in the near term.”