The Commerce Department reported a 1.3% decline in retail sales in May as consumers continued to shift their spending priorities amid the country’s gradual emergence from the pandemic. The setback was the fourth since store sales recovered their pre-pandemic peak in July. Sales declines were broad, with eight of 13 categories receiving lower revenue than in April. Spending at bars and restaurants finally reached their previous peak, and clothing stores doubled their year-ago revenue, but spending at home-and-garden centers, appliance stores and furniture retailers fell as more Americans transition from working at home. 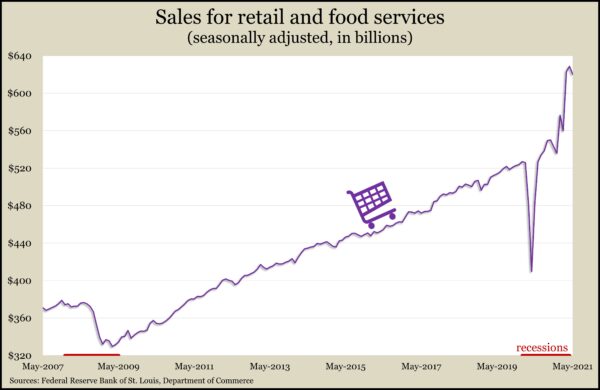 U.S. industrial output rose 0.8% in May, inching closer to levels before the pandemic, according to the Federal Reserve. Overall production was up 16.3% from the year before, though still 1.4% shy of where it was in February 2020. Manufacturing output rose 0.9% in May, led by a 6.7% increase from the automotive sector, which remained below its late 2020 pace because of supply chain bottlenecks. Capacity utilization rose to 75.2%, its highest level since hitting 76.3% in February 2020. An early indicator of inflationary pressure, capacity usage has not met the long-term average of 79.6% only once in more than 13 years. 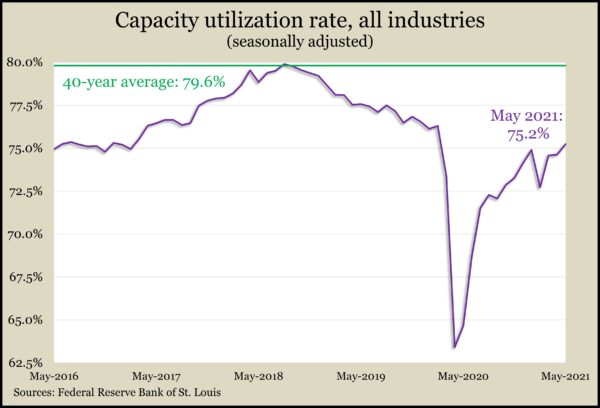 The Bureau of Labor Statistics said inflation on the wholesale level reached its highest year-to-year rate in more than a decade. The Producer Price Index rose 0.8% in May and was up 6.6% from May 2020. That’s the most in comparable data going back to 2010. The core PPI, which strips out volatile prices for food, energy and trade services, rose 1.1% from April and was up 5.3% from May 2020, also the most on record, dating back to 2014.

The pace of housing starts and building permits in May suggested the housing industry continues run at the highest levels in about 15 years. A joint report from the departments of Commerce and Housing and Urban Development showed the monthly volatility of the numbers, with the annual pace of starts rising 3.6% from April and of permits declining 3%. The pace of houses completed remained elevated, which could help address longstanding low supplies of houses for sale amid high demand. 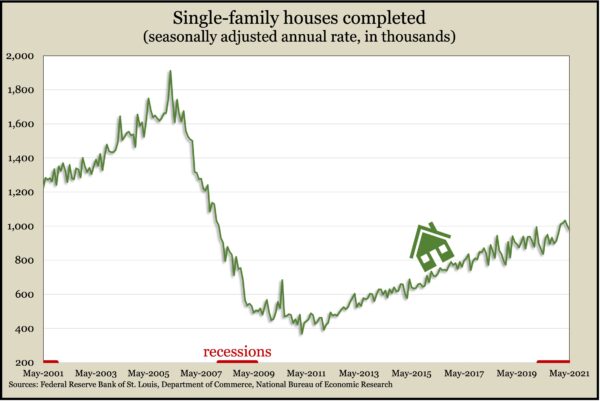 The four-week moving average for initial unemployment claims fell for the 10th week in a row and the 18th time in 19 weeks, getting within 6% of the 54-year average. According to Labor Department data, the average moved to 395,000 new applications, down from a record 5.3 million in April 2020. It was less than 210,000 just before the pandemic, the lowest level since 1969. Some 14.8 million Americans claimed jobless benefits in the latest week, down from 15.4 million the week before.

The Conference Board’s index of leading economic indicators rose 1.3% in May, following gains of 1.3% in April and 1.4% in March. The business research group noted widespread strength among the measures, led by the steady decline in unemployment claims. The only negative sign was the dip in housing permits. Based on its index, the Conference Board forecast economic growth at an annual pace of 9% in the second quarter, with year-to-year GDP growth of 6.6% for 2021, which would be the highest since 1984.