U.S. employers posted slightly fewer job openings in April, but demand for workers remained historically high. The Bureau of Labor Statistics reported 7.4 million openings, down from an all-time peak of 7.6 million in November. Unfilled jobs outnumbered the number of unemployed Americans for the 14th month in a row, reaching an all-time surplus of 1.6 million jobs. 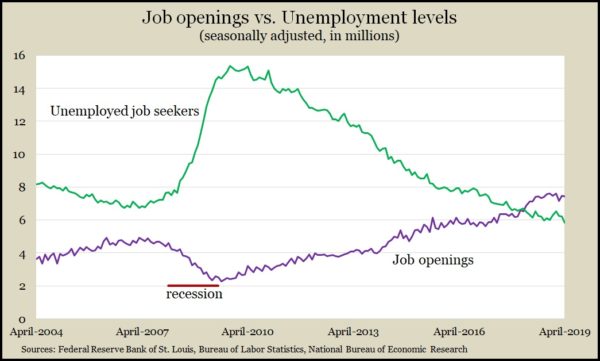 The Bureau of Labor Statistics said wholesale inflation rose a smidge in May, up only 0.1%, the slimmest gain in four months. A 1% decline in energy prices held back the measure. Excluding volatile food and energy prices, the Producer Price Index rose 0.4% from April. Year-to-year, headline wholesale inflation rose 1.8% after reaching as high as 3.4% last July. The core rate rose 2.3% from May 2018.

The broadest measure of inflation edged up in May, slowed by declining gasoline prices. The Consumer Price Index rose 0.1%, the slightest gain in four months. The core CPI, which excludes volatile food and energy prices, also rose 0.1%—for the fourth month in a row. On a more telling year-to-year measure, core inflation rose 2%, after 15 months of being above that mark, according to data from the Bureau of Labor Statistics. Since the recession, the core CPI averaged 1.8%, about half the average dating back to 1958.

The four-week moving average for initial unemployment claims rose for the first time in four weeks, though still hovering around its lowest level since late 1969. Labor Department data show the average level of jobless applications 38% below the 52-year average, which it has been under each week for more than six years. The indicator suggests continued reluctance by employers to let go of their workers in a strong hiring market.

May retail sales rose more than analysts expected with broad gains across categories, led by car dealers, online retailers, sporting goods stores and electronics outlets. According to the Commerce Department, only two of 13 categories had lower sales from April. Year-to-year, overall sales rose 3.2%, below the 3.7% rate in April as well as the long-term average of 4.3%.

The Federal Reserve reported that industrial production rose 0.4% in May, the second gain in the last three months. Manufacturing output, which accounts for about three-fourths of industrial production, rose 0.2% for its first gain since December, boosted by automotive production. The same report showed capacity utilization rising to 78.1%, more than analysts expected but still down from the 47-year average of 79.8%, suggesting inflation is not an imminent threat.

The University of Michigan said its preliminary consumer sentiment index for June dipped because of concerns about U.S. trade disputes with Mexico and China. At the same time, consumer expectations for inflation were the lowest in 40 years of surveys. Economists consider consumer sentiment a harbinger of consumer spending, which drives about 70% of U.S. economic activity.