The annual rate of new home sales fell in June, the third consecutive decline, the Commerce Department reported. The volatile indicator remained below the pre-pandemic level for the second month in a row after recovering swiftly from a sharp decline during the two-month 2020 recession. The number of new houses for sale rose to the highest level since late 2008; 30% hadn’t even begun construction.

The year-to-year increase in residential prices rose to another all-time high in May. The S&P CoreLogic Case-Shiller national home price index rose 16.6% from May 2020, the most in 33 years of data. It exceeded the previous high of 14.8%, set in April. An imbalance between limited supply and rising demand has been driving prices higher. Except for May 2020, the annual price gain has been accelerating every month since September 2019, when the year-to-year increase was 3.2%. 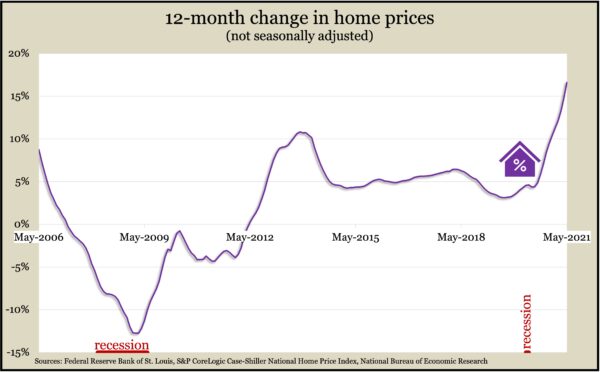 The Conference Board said its consumer confidence index was little changed in July but continued to suggest strong consumer spending to “support robust economic growth” through the third quarter and for rest of the year. The business research group said short-term expectations of inflation declined slightly, though they remained elevated. Importantly, more consumers said they intended to make major purchases in coming months. About 70% of the U.S. economy is driven by consumer spending.

Manufacturing demand remained high in June, with durable goods orders rising for the 13th time in 14 months. Orders were above their pre-pandemic levels for the eighth month in a row, reaching the second-highest peak in data going back to 1992. According to figures from the Commerce Department, core capital goods orders, a proxy for business investment, rose to another record for the eighth consecutive month.

The U.S. economy expanded at an annual pace of 6.5% in the second quarter, slower than expected but up from 6.3% in the first three months of the year. Adjusted for inflation, gross domestic product reached a record $19.4 trillion and was up 0.8% from the peak prior to the 2020 recession, according to the Bureau of Economic Analysis. Economic growth was led by consumer spending, which advanced at an 11.8% annual pace. Americans spent more at restaurants and hotels as more businesses reopened amid widespread COVID-19 vaccinations. The Federal Reserve Board’s preferred measure of inflation rose 3.8% from the second quarter of 2020, up from 1.8% in the first quarter. 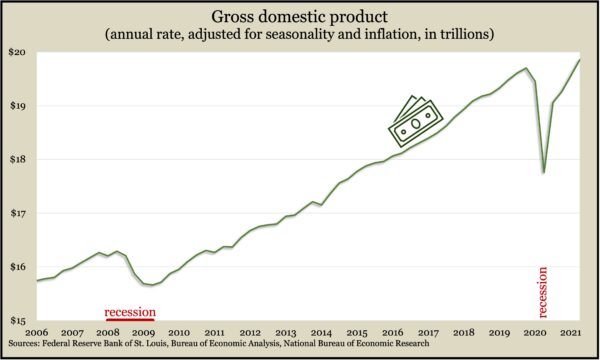 The four-week moving average for initial unemployment claims rose for the second week in a row and the fourth time in six weeks, the Labor Department reported. The new-claim average remained below 400,000, down from 5.3 million in April 2020 and within 6% of the 54-year average. In the latest week, 13.2 million Americans claimed jobless benefits, up from 12.6 million the week before. Nearly 75% of the claims were through pandemic relief programs scheduled to end in September.

The National Association of Realtors said its index of pending home sales fell 1.9% in June. The trade group’s index was also down 1.9% from the year before. An economist for the Realtors said high house prices are discouraging more home buyers, which will be exacerbated when historically low mortgage rate rise. The Realtors project sales of 5.99 million houses in 2021, down from a forecast of 6.2 million in March and just shy of 2020 sales.

The Bureau of Economic Analysis said consumer spending rose 1% in June to reach a seasonally adjusted annual rate of $20.4 trillion. Fueled by pent-up demand from pandemic-related closings, consumers spent more on restaurants, bars, gasoline and hotels. Personal income rose 0.1% for the month following declines in April and May after a boost from federal stimulus payments. The personal saving rate fell to 9.4%, the lowest since reaching 8.3% in February 2020. The personal consumption expenditures index, which the Fed follows for inflation, rose 4% from June 2020, the highest since August 2008. 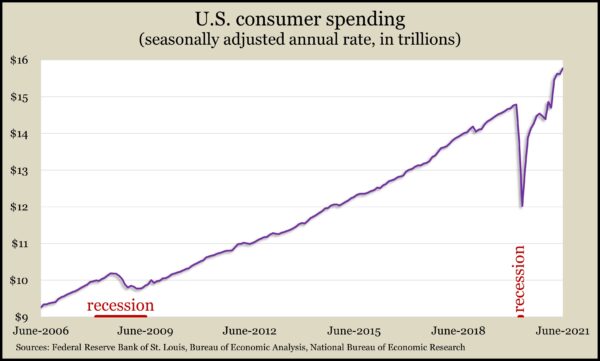 Often a pre-cursor to spending, consumer sentiment, declined in in July, according to a longstanding survey from the University of Michigan. The sentiment index reading fell to 81.2 from 85.5 in June, though it improved from 80.8 in mid-July. Mostly consumers expressed a lower outlook for the U.S. economy, complaining about high prices for houses, cars and durable goods. At the same time, survey respondents indicated they saw inflation as temporary and that they were confident enough in their jobs and finances to continue spending, despite higher prices.