The nation’s broadest measure of inflation, the Consumer Price Index, rose 0.3% in June mostly because of a 3.3% increase in gasoline prices. Aside from volatile fuel and food costs, though, inflation was up 0.1% in June, the narrowest gain since January, the Bureau of Labor Statistics reported. Year-to-year, prices rose 1.9% excluding fuel and food, putting it near the Federal Reserve target of 2% but still far from the 30-year average of 2.8%.

For the third month in a row, sales of existing houses accelerated in June, eclipsing the annual rate of 5-million houses for the first time since October. An economist for the National Association of Realtors said the housing recovery is being held back by a lack of growth in wages a slow pace in the sales of new houses.

The annual rate of new-home sales fell 8% in June from a dramatically lower estimate for May, the Commerce Department reported. As a result, the supply of new houses on the market rose to the highest since October 2011. The report indicated further stumbling in the housing recovery that appears to have peaked about a year ago. The annual sales rate of 406,000 houses in June was down 43% from the 30-year average. 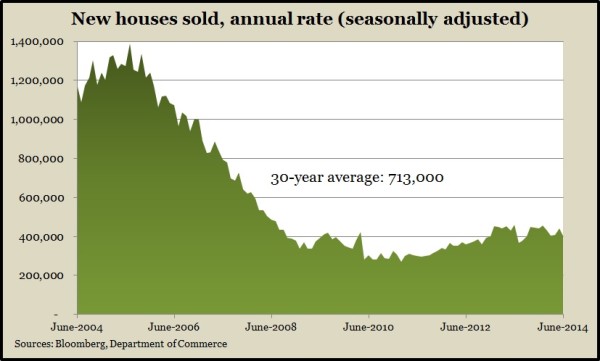 The four-week moving average of initial unemployment claims dipped to its lowest point since May 2007, in an ongoing sign that employers are hesitant to let workers go. The Labor Department reported the average fell for the third week in a row, and the level of claims has been lower than the all-time average for more than 18 months.