After three months of declines, existing home sales bounced back with a record rebound in June, according to the National Association 0f Realtors. The trade group said houses sold at a seasonally adjusted annual rate of 4.72 million in June, up 20.7% from the pace in May. The sales rate in February, before widespread shutdowns from the COVID-19 pandemic, was 5.72 million, 17% higher than the June pace. An economist for the Realtors said the housing market comeback should be sustainable as long as mortgage rates remain at record lows and employers continue to hire back workers. A longstanding low inventory of houses for sale should continue to push up prices. The median selling price rose 3.5% from June 2019, the 100th straight year-to-year increase.

The four-week moving average for initial unemployment claims declined slightly for the 13th week in a row, but weekly applications rose for the first time since peaking at nearly 6.9 million at the end of March. Job losses from the COVID-19 virus and closures to limit its spread appeared to be on the rise again as more cases flare. Data from the Labor Department shows the four-week average more than 1 million applications above its long-term average and more than quadruple its level in April 2019, which marked a 50-year low. 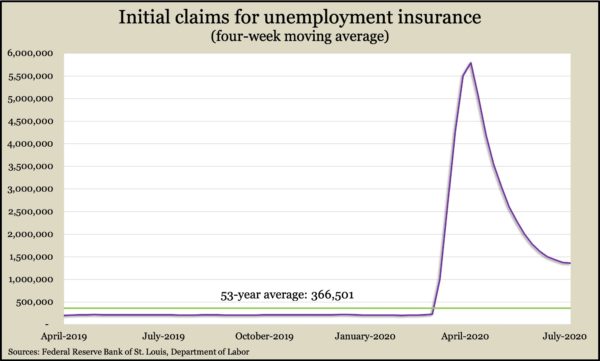 The U.S. economy could remain in recession territory for some time yet, according to the June index of leading economic indicators. The Conference Board said its index rose 2% from May, thanks to improvements in labor conditions and stock prices, but broader financial indicators and consumer confidence suggest the economy remains weak. The business research group said between the index and a resurgence in coronavirus cases, economic recovery remained at bay.

The combination of low mortgage rates, pent-up demand and more reopenings in June sent the annual rate of new-home sales to its highest level since 2007. The Commerce Department said Americans bought new houses at a pace of 776,000 in June, up 13.8% from the May rate and up 6.9% from June 2019. Sales soared especially in the Northeast and West, the first areas of the country to shut down to thwart the spread of the coronavirus. Inventories of new houses for sale fell to their lowest level in four years, a sign that demand is outstripping supply, which has fueled price increases. The median sales price rose 5.6% from the year before.