Consumers spent 0.4% more in June than May, according to retail sales data from the Commerce Department. Eleven of 13 categories rose in monthly sales, with only electronics stores and gas stations declining, the latter because of lower prices. Online retailers and restaurants had the biggest gains. Year-to-year sales overall rose 3.4%, compared to the long-term average of 4.3%. Economists watch retail sales as a sign of consumer spending, which generates about two-thirds of U.S. economic activity.

Business inventories rose 0.3% in May, while sales increased 0.2%, according to the Commerce Department. Inventories were up 5.3% from last May, while sales were up just 1.5%. The figures suggest businesses continued to overstock and may be getting too far ahead of demand.

The Federal Reserve reported that industrial production was unchanged in June, following a 0.4% gain in May and declines in three of the first four months of the year. Factory output rose 0.4%, boosted by car makers. But manufacturing fell at an annual rate of 2.2% in the second quarter, similar to its performance in the first quarter, perhaps reflecting a slowdown in the global economy. Capacity utilization for the industrial sector declined for the sixth time in seven months, reaching 77.9%, suggesting inflation remained relatively subdued. 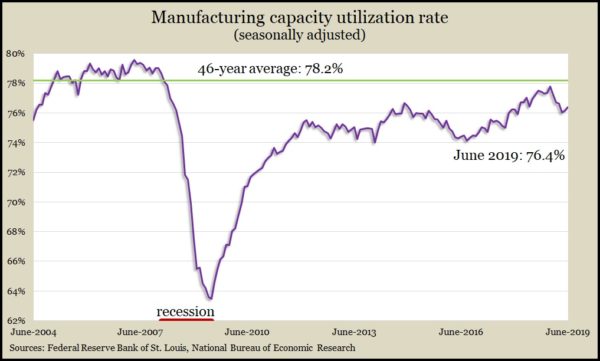 New residential construction for June was lower than expected. Housing starts were at an annual pace of 1.25 million residences, down 0.9% from May but 6.2% ahead of the year-ago pace. Single-family starts rose faster in both periods, though it remained at about 45% of the peak pace in January 2006. Building permits declined more than anticipated. Single-family permits picked up pace for the second month in a row, though they’ve trended lower since a post-recession peak in early 2018.

The four-week moving average of initial unemployment insurance claims moved lower for the second week in a row to a level 38% below the 52-year average. The Labor Department data suggest persistent employer reluctance to let workers go in a tight hiring market, which should put pressure on wages and encourage consumers to spend.

The Conference Board’s Leading Economic Index declined 0.3% for June, following no change in May and a 0.1% gain in April. The Conference Board blamed the setback on weak factory orders, sagging housing permits and the first extended inverted yield curve since 2007. The business research group said its index suggests slow U.S. economic growth for the rest of 2019.

The University of Michigan reported that consumer sentiment rose slightly from the end of June, remaining close to a 15-year high set a year ago. The university’s long-standing survey showed consumers raising expectations a bit from June but also narrowly lowering their assessments of current conditions.