American consumers borrowed slightly more than analysts expected in May. The Federal Reserve said outstanding consumer credit rose by $17.1 billion, an annual pace of 5%, vs. 5.2% in April. Credit card debt rose at an annual pace of 8.2%, up from 7.9% in April, suggesting consumers were more confident that their income can support their spending. Consumer spending accounts for more than two-thirds of U.S. gross domestic product. 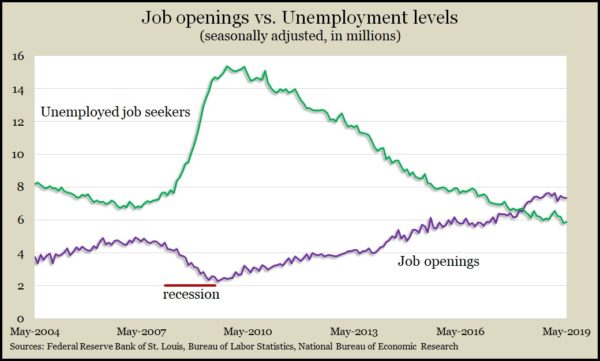 The nation’s wholesalers continued to stockpile merchandise ahead of orders in May, as inventory levels rose 0.4%, lagged by a 0.1% increase in sales, according to the Commerce Department. The inventories-to-sales ratio, a gauge of how lean businesses are operating, rose closer to its post-recession high. Year-to-year, wholesale inventories were up 7.7% while sales had risen just 0.4%.

The broadest measure of inflation, the Consumer Price Index, inched up by 0.1% in June. Price increases in apparel, housing, health care and used cars offset a 3.6% drop in gasoline prices. Excluding volatile food and energy prices, the core CPI rose 0.3% from May, exceeding analyst expectations. Year-to-year, the CPI rose 1.6%, but the core advanced 2.1%, the highest since January, according to the Bureau of Labor Statistics.

The four-week moving average of initial unemployment claims fell for the first time in five weeks, continuing to reflect a tight hiring market in which employers are reluctant to let go of workers. Data from the Labor Department show new jobless applications are 38% below the 52-year average. Claims have been below average every week since the beginning of 2013.

Inflation on the wholesale level remained muted in June, rising 0.1% from May, as measured by the Producer Price Index. Excluding volatile prices for food, energy and trade services, the index was unchanged from May and up just 1.7% from June 2018, the Bureau of Labor Statistics reported. That was the lowest year-to-year wholesale inflation rate since January 2017.