The pace of motor vehicle sales exceeded 16.9 million in December, capping off the best year since before the recession in 2006. Manufacturer reports gathered by Autodata Corp. showed sales up 9% from December 2013, led by domestic trucks, which are benefiting from lower gas prices.

Amid rising expectations that a slowing global economy will dampen U.S. manufacturing, the Commerce Department reported that factory orders fell 0.7% in November, the fourth consecutive monthly decline. Even excluding volatile aircraft contracts, orders contracted for the second month in a row. Another measure in the report suggested that businesses are investing a little less in equipment.

Service businesses expanded in December, although at a slower pace than in November, which was the second-strongest month in nine years. Institute for Supply Management non-manufacturing index showed the largest sector of the U.S. economy growing for the 59th month in a row. Overall, purchase managers expressed optimism about current business conditions and the economy overall.

The U.S. trade deficit shrank to its narrowest gap in 11 months in November, the Bureau of Economic Analysis said. Much of the narrowing came from the petroleum products deficit, reflecting both the decrease in oil prices and America’s thinning reliance on imported oil. The report included a record import of consumer goods, suggesting stronger confidence among U.S. consumers.

Still, credit card debt declined in November for the second time in four months, according to the Federal Reserve. Much of the monthly increase in consumer credit outstanding continued to flow from student loans and car financing. Consumers appear to continue being careful about credit card use, which could be a sign that they remain a bit leery of spending. 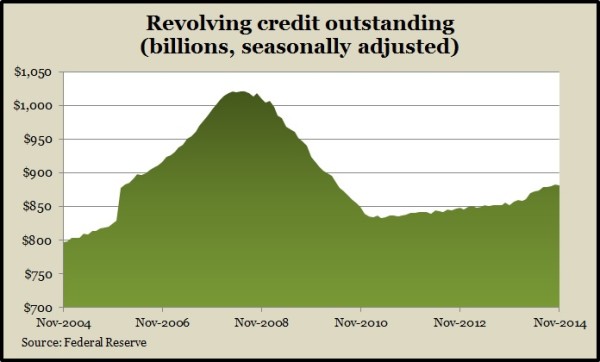 The moving four-week average for initial unemployment claims dropped for the third time in four weeks, an ongoing sign that employers overall are reluctant to part with their workers. The Labor Department reported that jobless numbers remained below the 47-year average, where they have been for more than two years.

Employers added nearly 3 million jobs in 2014, the most in 15 years, and the unemployment rate in December dropped to the lowest it’s been since before the 2008 financial collapse. The Bureau of Labor Statistics reported further signs of expansion in the employment sector. December job gains exceeded analyst expectations and were broadly distributed across industries with notable gains in areas such as construction and manufacturing. The number of unemployed job seekers fell by 1.7 million in 2014, including 1.1 million who had been looking for work more than six months. But weak spots in the job market remained, with average wages falling from November and the share of labor force either working or seeking work at its lowest point since 1977.

The Commerce Department reported that wholesale inventories rose at 0.8% in November while sales declined by 0.3%. The report suggests companies are overestimating demand and may need to slow business to keep it in pace with sales.