BONUS: How to handle a financial windfall, a Money Talk Video with Isabelle Wiemero

Limited supply and ongoing demand continued to accelerate the year-to-year increase in residential prices in November, according to the S&P CoreLogic Case-Shiller home price index. The 20-city composite index rose by 9.1%, up from 8% in October and the biggest year-to-year gain since 2014. A price acceleration that began in August 2019 slowed only in April, May and June for the pandemic-induced recession.

The Conference Board said its consumer confidence index rose in December on greater optimism for the near-term outlook. Higher expectations offset lower opinions of current conditions, colored by the COVID-19 pandemic, according to the business research group. A higher percentage of consumers said they planned to buy a house in the next six months.

Manufacturing’s recovery continued at a slower pace in December, according to a Commerce Department report on durable goods orders. Demand grew to within 0.7% of the level in February, before widespread lockdowns from the pandemic. The 0.2% December rise was the lowest of eight consecutive increases, rebounding 45.9% from a low point in April. Compared to December 2019, orders were down 7%, mostly because of commercial aircraft and other transportation equipment.

The U.S. economy rose at an annual pace of 4% in the fourth quarter, though on a full-year basis, inflation-adjusted gross domestic product contracted a record 3.5%, according to the Bureau of Economic Analysis. Consumer spending, which drives about two-thirds of economic activity, declined 3.9% from 2019. Preliminary estimates showed the economic recovery slowing down in the fourth quarter. The Federal Reserve Board’s preferred measure of inflation remained weak, rising 1.4% from 2019. 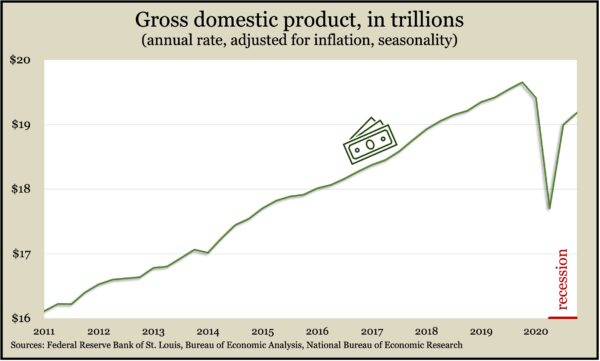 The four-week moving average for initial unemployment claims rose for the seventh time in eight weeks as COVID-19 cases surged near the end of 2020 and federal relief for dislocated workers increased. The level of new claims was more than four times its recent low in February and well above the highest mark prior to the pandemic. The Labor Department said 18.3 million Americans claimed jobless benefits in the latest week, up from 2.2 million the year before.

Housing remained a bright spot in the economic recovery, with the annual rate of new home sales rising in December for the first time after hitting a 14-year high in July. The Commerce Department said full-year sales of new houses rose 18.8% in 2020, the fastest pace since 2006. The monthly supply of new houses for sale tied with 2013 for the lowest since 2005, which helped push the median price to $333,100 in 2020, up 3.6% from 2019.

The Conference Board said its index of leading economic indicators rose 0.3% in December, down from gains of 0.7% in November and 0.9% in October. The business research group said the smaller increases signaled moderating economic growth in the first quarter. Except for unemployment claims and consumer expectations, the indicators showed broad improvements. The Conference Board forecast the GDP to grow at least 2% in the first quarter of 2021 with bigger gains to follow.

The Bureau of Economic Analysis said consumer spending fell 0.2% in December, the second decline in a row. Meantime, personal income rose for the first time in three months, largely from federal stimulus payments. As a result of rising income and lower spending, the personal saving rate reached 13.7% of disposable income, remaining well above the long-term average of about 8%. The core personal consumption expenditures index, which the Fed follows for inflation, rose 1.5% from December 2019, still below the Fed’s target rate of 2%.

The National Association of Realtors said its index of pending home sales fell for the fourth month in a row, dropping 0.3% in December, largely because would-be buyers had fewer houses to choose. The trade group’s index rose 21.4% from December 2019, and a staff economist projected a 15% increase in sales in 2021, rising to nearly 6.5 million from more than 5.6 million in 2020. The Realtors also forecast a slowdown in price acceleration, saying more home builders will respond to low supplies.

According to the University of Michigan consumer sentiment index for January, Americans’ attitudes toward the economy and personal finances have stayed relatively stable during the pandemic so far. An economist with the longstanding survey said despite declines in the index from recent years, consumers’ outlooks remained more optimistic than in prior downturns. He said he expects personal savings to boost the economy with accelerated consumer spending late in 2021.