Propelled by low mortgage rates, rising demand and low inventory, U.S. housing starts and building permits reached 14-year highs in December. The annual pace of housing starts rose to nearly 1.7 million units, led by single-family houses, which hit their highest level since September 2006. According to the Commerce Department, building permits, an indicator of future construction, rose just past 1.7 million, the highest point since August 2006. Permits and starts for multi-family housing declined from their recent pace. Single-family construction made up 72% of the permits authorized, up from 65% the year before. 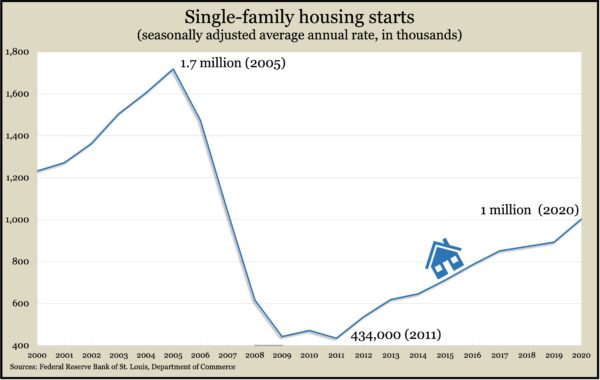 The four-week moving average for initial unemployment claims rose for the second week in a row and the sixth time in seven weeks as a late-year surge in COVID-19 cases and subsequent business restrictions took a toll. The rolling average reached 848,000 initial claims, down from nearly 5.8 million in April but quadruple the 51-year low set in February. The Labor Department reported 16 million claims for jobless benefits altogether, down from 18.4 million the week before but up from 2.3 million the same time last year.

In another sign of a housing boom, existing home sales rose to their highest annual level since 2006. The National Association of Realtors said December sales gained 0.7% from the November pace and grew 22.2% from the end of 2019 to reach an annual rate of 6.76 million. That’s up from 5.53 million in December 2019. Citing persistent demand and low mortgage rates, the trade group said continued economic recovery, including further stimulus payments, should help sales maintain their momentum. On the supply side, the Realtors said inventory reached a record low of 1 million houses for sale in December, enough to last less than two months at current sales rates. The median price for houses rose 12.9% from December 2019, the 106th consecutive gain in year-to-year prices.