U.S. employers posted fewer job openings in November, and while they hired 1.1% more employees, they also sidelined 5.3% more. The Bureau of Labor Statistics reported that the number of openings stood at 6.5 million, down for the second time in four months. Demand for workers was up 30.6% from its recent low in April but remained 6.8% behind the level in February, just before the pandemic prompted widespread business closings. Before the pandemic, openings far exceeded the number of unemployed workers seeking a job. 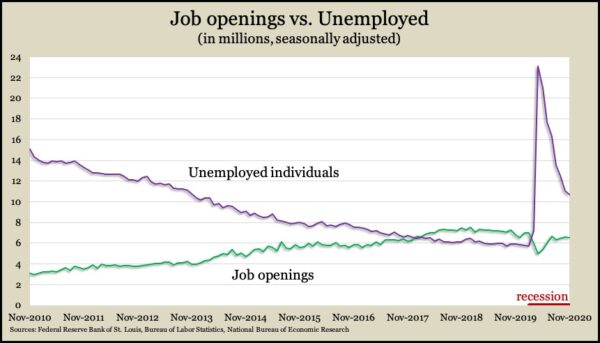 The broadest measure of inflation showed prices rising 0.4% in December, mostly because of higher gas prices. The Bureau of Labor Statistics said the 1.4% increase in gas accounted for 60% of the monthly gain in its Consumer Price Index. Year to year, though, gas prices were down 15.2%, as travel declined because of the pandemic. Compared to December 2019, the CPI rose 1.4%, below the Federal Reserve target of 2% inflation. In February, the 12-month CPI rate was 2.3%. It fell as low as  0.1% in May.

The four-week moving average for initial unemployment claims rose for the fifth time in six weeks, signaling setbacks in the recovery of labor markets. Claims averaged 834,250, more than four times the 51-year low reached in February and well above the pre-pandemic high, which was 674,000 in 1982. The Labor Department said 18.4 million Americans claimed jobless benefits in the most recent week, up from 2.2 million the year before.

With consumer spending driving about two-thirds of the U.S. gross domestic product, a third consecutive decline in retail spending in December suggested a renewed slump from COVID-19. The Commerce Department said spending at stores sank 0.7% from November. The only other time retail sales decline in October, November and December was during the financial collapse in 2008. Excluding an increase in sales from gas stations, which benefited from higher prices, retail sales fell 1.2% in December. And though overall sales were 2.6% above their level in February, before the pandemic, some categories were much worse off than others. Year to year, bars and restaurants experienced a 21.2% decline in sales, while online retailers had an increase of 19.2%.

Recovery from the economic collapse in the spring continued to show in wholesale inflation figures from December. The Bureau of Labor Statistics said the Producer Price Index rose 0.3% from November, the eighth increase in a row after declines from February through April. Costs for food and energy both rose, but even excluding those volatile components and trade services, the index rose 0.4%, the most since September. The core PPI registered a year-to-year gain of 0.8%, the highest since a 1.1% rise in February, down from a 2% increase in January.

A Federal Reserve report on industrial production suggested the threat of inflation remained subdued. Capacity utilization, a measure of potential inflation, rose for the seventh time in eight months, but at 74.5%, the rate stayed below its mark in February as well as its long-term average of 79.8%, which hasn’t been reached in nearly 13 years. The Fed said industrial output rose in December for the third month in a row, but it was still 3.3% below its level in February. Increased production from utilities led the monthly gain following a seasonally warm November.

A preliminary January reading of consumer sentiment suggested “trivial” change, considering a resurgence in COVID-19 cases, the attack on the U.S. Capitol and President Trump’s second impeachment. The survey-based index from the University of Michigan dipped to 79.2 from 80.7 at the end of December. An economist with the survey said hope for vaccines helped bolster consumer feelings, as did a shift in partisan expectations accompanying a transition to President-elect Biden.