Growth in the U.S. non-manufacturing sector slowed down more than analysts expected in November. The Institute for Supply Management said its monthly index dipped to its lowest point since July, although it still indicated the 107th consecutive month of expansion for the sector, which represents about 90% of the U.S. economy. Purchase managers surveyed for the index expressed concerns about tariffs and employment constraints but remained mostly optimistic about the business climate. The ISM said the index level corresponds to an annual growth rate of 3.2% for the economy.

U.S. employers reported 6.9 million job openings in November, down 3.4% from October but above the 6.8 million level for the sixth month in a row, which has never happened before. Since March, the number of openings has exceeded the number of job seekers, indicated by monthly household surveys, suggesting how tight the job market is. Although the Bureau of Labor Statistics showed a lower quit rate, a sign of employee confidence, it remains historically high. Overall, the report shows demand continuing to exceed supply in the labor force, which should push up wages and fuel consumer spending.

The Federal Reserve Board reported that outstanding consumer debt, excluding mortgages, rose by $6.9 billion in November. The gain was up 6.7% on an annual basis, including a 7.1% increase in non-revolving debt such as student loans and car financing. Credit card debt rose 5.5% following a 10.9% annual pace in October, suggesting slower but continued strength in consumer spending, which drives about 70% of U.S. economic expansion.

The policy-making body of the Federal Reserve released minutes from its December meetings, in which officials indicate they might be cooling to the idea of further interest rate increases. The Federal Open Market Committee has raised short-term rates nine times since late 2015 to gradually back off on monetary support to the economy begun back in the recession. According to the minutes, officials may be giving pause to further increases soon amid growing concerns of a slowing global economy and impacts of trade tariffs. The committee is scheduled to meet next at the end of January.

The four-week moving average for initial unemployment claims rose for the first time in five weeks, according to data from the Labor Department. The level of new jobless applications was 37% below the 52-year average. Claims have been below average every week since the beginning of 2013, signaling employers’ longstanding reluctance to let workers go. Separately, federal employee claims rose by 819 or 15.7% from the year before.

The broadest measure of inflation, the Consumer Price Index, declined 0.1% in December, led by a 7.5% drop in gas prices. Excluding volatile energy and food prices, the CPI rose 0.2%, the same as in November and October. Year-to-year, the main index rose 1.9%, its lowest since July 2017, according to the Bureau of Labor Statistics. Core inflation, rose 2.2% from December 2018, staying near the Federal Reserve’s target of 2% inflation for the 10th month in a row. 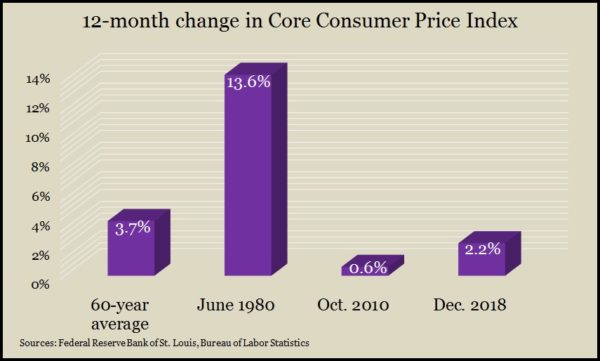